Home Rangers Rangers defender has revealed something fans will love…. 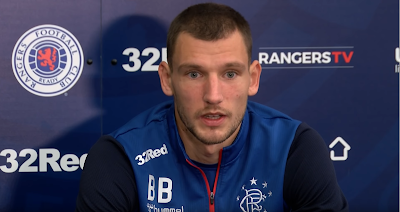 Rangers fans could be in for a treat after bang-in-form left back Borna Barisic admitted not only is he playing the best football of his career, but he believes he’ll get much better too.

The Croat international, whose global stock has skyrocketed in recent weeks due to increasingly impressive performances, was speaking prior to tomorrow’s visit of Motherwell, where while the headlines about his concession he feels he’s proven his doubters (loosely including us at the site) wrong, more importantly he’s going to get better.

“Now when I get in shape, when I’m sharp and physically good, I can show them all how good I am, and I think that this is not yet the best of me, I can show more. So we’ll what the future can bring.”

In fairness, all of Barisic’s Rangers improvement came about the past two months ever since his world class free kick at St Mirren in August, so we’d not be at all shocked if the former Osijek star is nowhere near at his peak yet, given he’s only been producing at this high level for barely 8 weeks.

It does nevertheless bode magnificently for the future – Rangers have a genuinely world class talent now on our hands, one who’s showing his real qualities in our shirt and not just his national team’s, and if he’s only going to get better yet, that really is an exciting prospect to say the least.