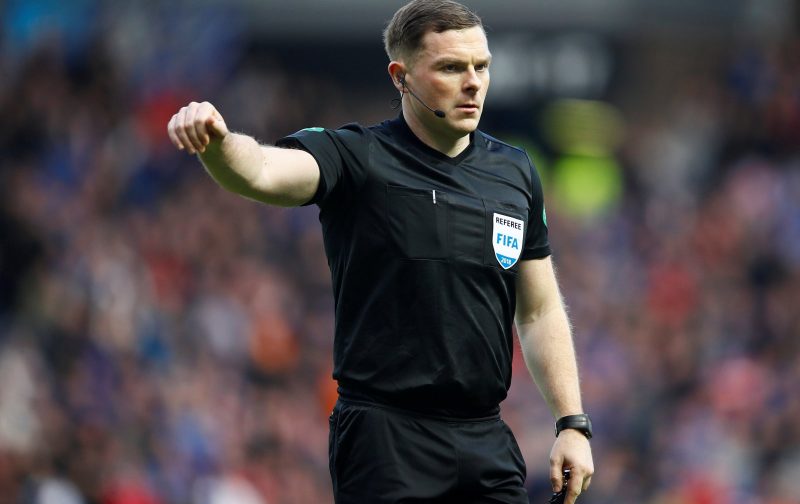 Ibrox Noise, like many others we’d imagine, noted with amusement Celtic’s statement yesterday over the Alfredo Morelos decision.

As we all know, Morelos will not face any punishment after it was decided that referee John Beaton had seen all of the incidents and elected not to take action, and as such retrospective action would undermine the referee.

Coming only weeks after Willie Collum and Daniel Candeias’ red card episode followed by Rangers’ own statement and manager Steven Gerrard’s exasperation, what the whole affair highlights, sadly, is twofold:

First off, the appalling refereeing in this country. It may have benefited us this time, but Beaton’s incompetence with regards the Colombian (it was a red card at least twice) is symptomatic of repeated failings in this country when it comes to officiating. Rangers have suffered the wrong end of it constantly this time, so frankly we’ll take this little reverse quite happily, but it is representative of how utterly poor the men in black (or yellow) north of the border are.

Secondly, the outrage in Celtic’s statement was slightly amusing – they’ve benefited from horrible refereeing in this country more than most in recent seasons, and the moment it finally costs them they release a DVD…errrr, make a statement?

Rangers’ statement was the culmination of a lot of bad decisions going against us, and Collum’s mistake was the straw that broke Rangers’ camel’s back. But Celtic’s, while not factually wrong, was very much a rattle and pram moment. Always the way when you stop getting the rub of the green and things start going against you a bit more.

We have to say, the threats against Beaton (he had to call the police), even more sadly, are nothing new. While Rangers fans are no saints either, Celtic ‘fans’ have history of this against referees – indeed, in 2010 Collum got death threats after Rangers beat Celtic. We don’t believe any decent-minded supporter (of either side) would ever indulge in this, and the small group of nutters on both sides really do spoil the barrel. But we must admit Celtic’s statement didn’t help matters here, and has stoked the already simmering fires in their support following such a bad loss.

We should say, we don’t buy into conspiracy pap – never have never will. There is no bias in Scottish referees, just absolute incompetence, and Rangers have suffered more of that in recent times than Celtic. So while it’s fun to suggest the refs are against you, the reality is they’re just useless with everyone.

As for our green and white friends, perhaps they should think more about how to respond to getting utterly skelped by our good selves than protesting about a bad referee.

Or better yet, don’t.