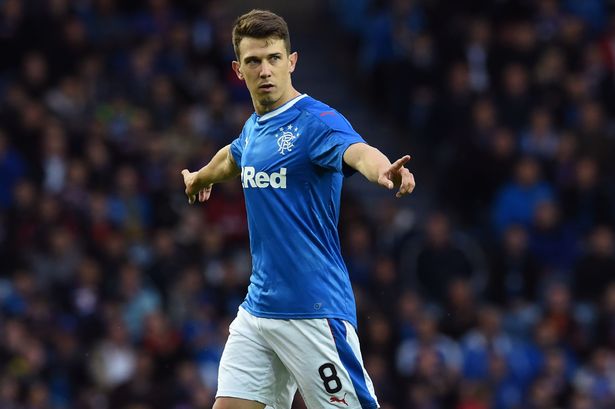 There is no doubt Rangers’ midfield is arguably the strongest and best-performing it has been since pre-2012.

Indeed, some could even make a valid case that the current pairing of Greg Docherty and Sean Goss matches or even exceeds the Steven Davis and Mo Edu pairing of years gone by, despite neither current player having a senior cap for their countries.

But whatever way you wish to rate the pair, they have been sensational, and far more befitting of a real Rangers midfield.

Which brings us onto Ryan Jack. And before I add anything further, this article is in no way an attack on the lad, nor a smear campaign – it is just an objective analysis.

The reality is Ryan Jack, before his injury, had failed to set Ibrox alight on any level. A tonne of bookings, sendings off, and genuinely underwhelming displays punctuated him which saw many fans defend him because he should have been better than he was.

When we compare the instant impact of Docherty plus the slightly slower one of Goss (a few weeks) it becomes evident what constitutes a good midfielder at Ibrox, and the fact all fans are delighted with the pair of them while Jack divided supporters to an extent gives some idea of how much more impressive they have both been than the ex-Aberdeen captain.

In theory, Jack is a fine player – he was excellent at Pittodrie and he was the highest priority signing for Rangers last summer, but it would simply be untrue to claim he has lived up to that reputation.

In no way are we kicking a man when he’s down – we have utter sympathy for his injury plight and still cannot quite believe Graeme Murty failed to condemn such a clear assault by Motherwell’s Cedric Kipre (we saw the Steelman at it again against Hearts at the weekend). We wish for a speedy recovery for a player who surely has more to give.

But Goss and Docherty’s form and ability is unquestionable, and in many ways Ryan Jack can only benefit from that. It forces him to raise his game on return and gives Graeme Murty a massive selection headache – and Rangers are better off with more than one strong and capable defensive midfielder.

Competition at Ibrox is critical. As excellent as Docherty is, should he lose form right now only Holt is available to take his place. A Ryan Jack playing like the player we believe we signed is a far better alternative.

Of course this is a bit moot till the lad regains fitness, and that seems to be some distance down the line. But he now knows when he comes back that his game will have to improve considerably – and we know he is more than capable of that.

End result benefits Rangers and that’s what we want to see.