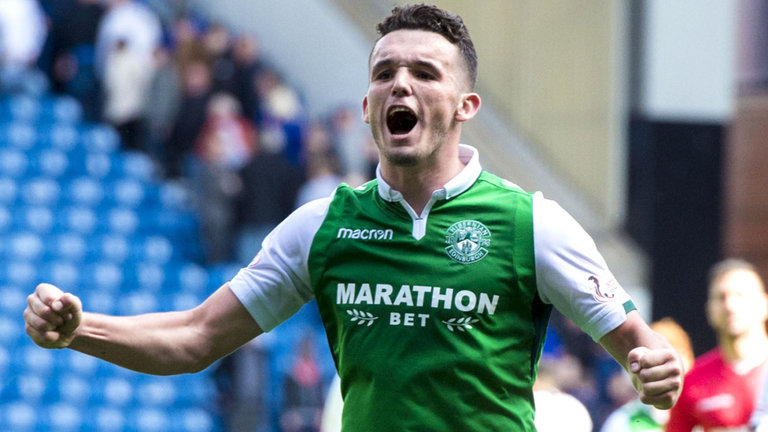 According to ‘Football Whispers’ Hibernian’s John McGinn continues to be linked with an unlikely switch to Rangers, with the ‘whisper’ rating not too far behind that of confirmed target Jamie Walker.

The midfielder, who has four appearances for Scotland under his belt, has been a mainstay of Hibernian’s first team for some considerable time now, and has been a consistent and impressive performer for the Edinburgh side down in the Championship and now in the SPL.

With his grandfather being Jack McGinn, and his obvious ties to Celtic, this is another link, like Lewis Morgan, which does not seem overly likely, but with the old ‘likelihood to play in the first team’ question being a significant one for any SPL player considering a switch to Parkhead, it does enhance Rangers’ case a touch.

The 22 year old playmaker was chosen ahead of Rangers’ Jason Holt back in their Championship season when it came to the national team, but it has to be said the former’s fortunes since then have probably exceeded the latter, and the ex-St Mirren man would be likely to enhance Rangers’ first team.

Mark Warburton’s Nottingham Forest also had a bid last summer rejected, so Rangers would be far from alone with Celtic in interest in the player.

But it really does seem a bit of a stretch and we would be surprised if this story came true.