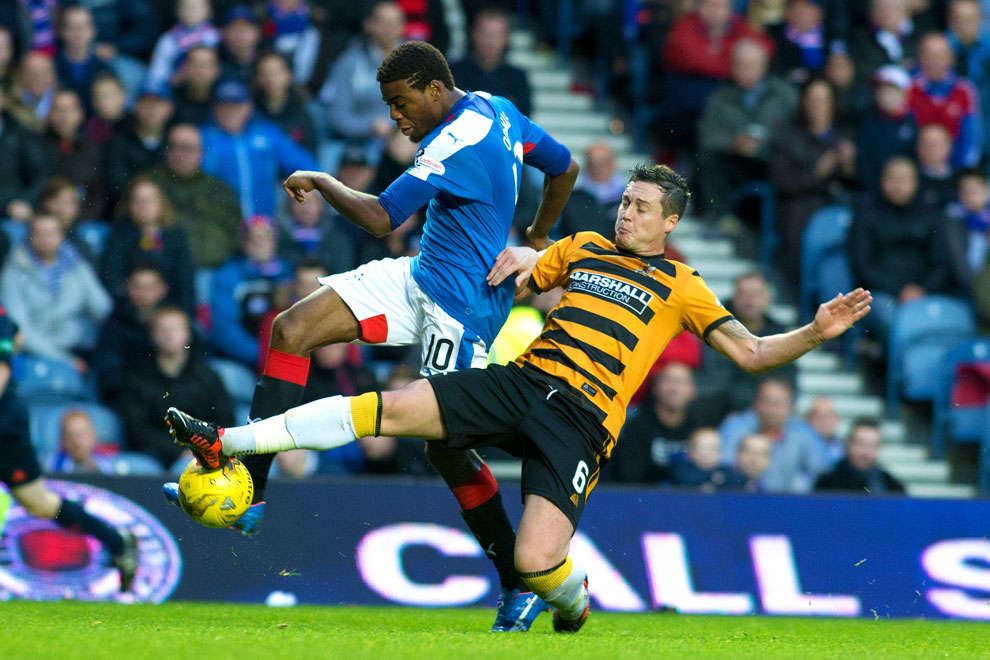 When England youth international Nathan Oduwa was linked last summer with a loan move to Mark Warburton’s Rangers from his parent club Tottenham Hotspur, the obligatory YouTube research found a player of promise, with some clever trickery in his armoury.

The winger had never scored at senior level for any club, although at age 19 there was certainly plenty of time to do so.

He subsequently arrived at Ibrox with a growing reputation, and took his maiden bow at the Indodrill Stadium in Alloa, coming on as a sub on the 60 minute mark – and this was where Nathan Oduwa’s (unwarranted) controversies in the Scottish game began.

After humiliating the Wasps’ central defender Colin Hamilton with a lavish ‘rainbow flick’ by lifting the ball over the home defender’s head before being fouled by him, the attacker was post-match accused of belittling his opponent which saw headlines use the word ‘disrespect’, although the player himself (Hamilton) never actually said that word.

Naturally this only happened because it was a Rangers player, for we have seen dozens of examples of such trickery (Douglas Costa’s flick against Leverkusen for Bayern two weeks later brought praise and not widespread criticism), but nevertheless it left a marker on Oduwa.

We did not see the best of the youngster till Raith Rovers came to Ibrox – this was, and remains, Oduwa’s shining hour in a Rangers shirt. The trickster was electric – two assists, winning a penalty, and some wonderful improvised play too. He destroyed Raith alone, and it looked like he was flourishing at last.

Unfortunately since then, not unlike his colleague Gedion Zelalem from Arsenal, it has tailed off a little. There have been undeniable glimpses of his talent in fits and starts, but nothing sustained and nothing which has led to him securing a permanent starting slot.

However, after the quite thuggish treatment he was subject to when then-Livi manager Mark Burchill’s outfit went to Ibrox in the Petrofac Cup in October, it is not surprising.

Burchill’s tactics clearly instructed his men to carry out a hatchet job on the playmaker, and Hugo Faria and Kieran Gibbons in particular assaulted him with minimal punishment.

That brought condemnation from everyone of a Rangers persuasion, but no respective action.

The last time Oduwa showed any skill was against Falkirk away, and the moment he did, he was clattered by Leahy.

In short, the attacker is not being allowed to flourish in the Scottish game for fear of retribution – defenders and midfielders are clearly being told to stop him at any cost, and as such he is completely unable to develop here.

The lad has talent, lots of it, although he does suffer like any winger from inconsistency. But if his manager Mauricio Pochettino saw the kind of treatment he gets from his opponents north of the border, he would probably terminate the loan deal anyway.

It is a great shame, that Rangers fans are unable to truly see what Oduwa can do – but a fine glimpse of it occurred v Raith.

Unfortunately Scottish football will pull out all the stops to make sure that does not happen again.