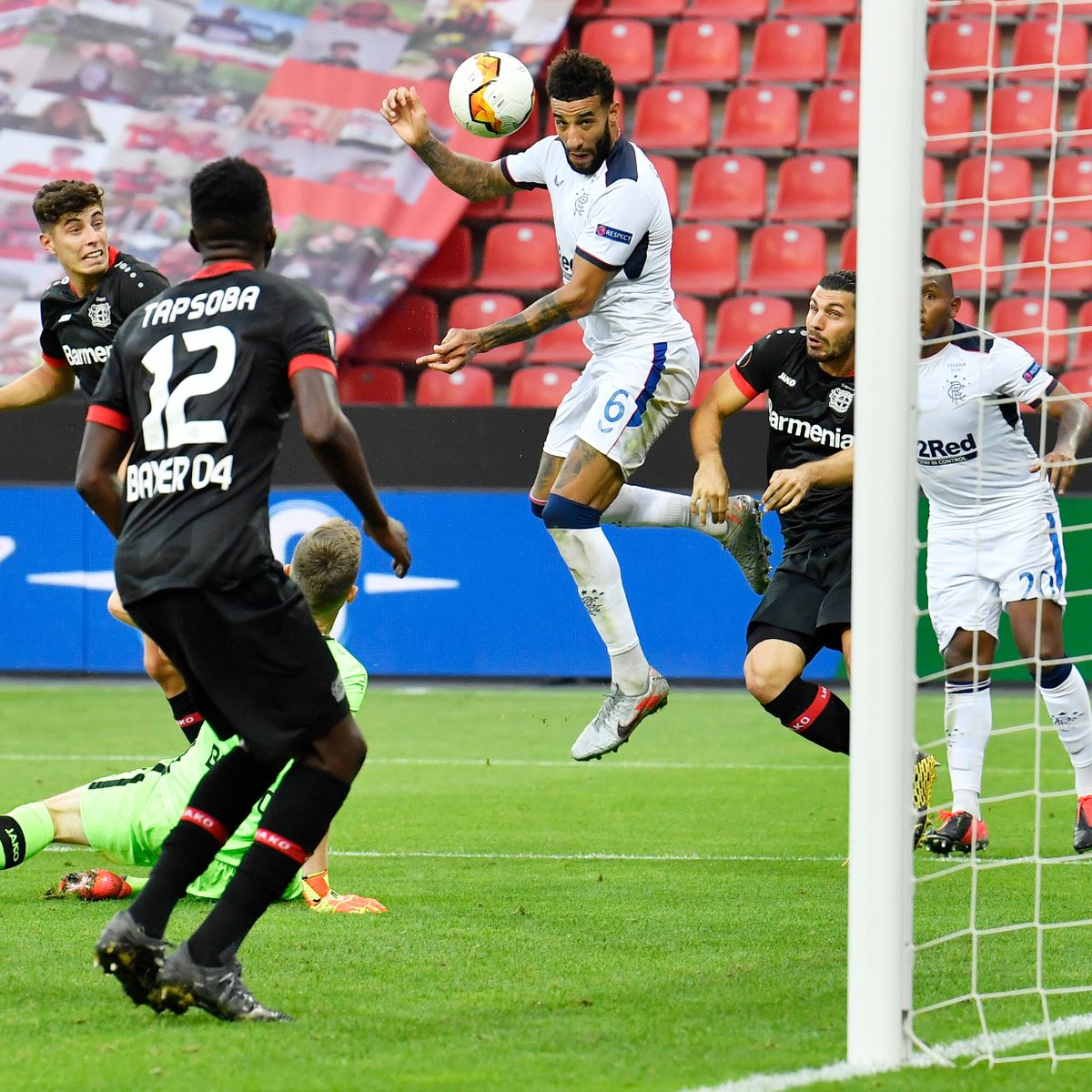 Rangers’ prolonged and frankly excellent European adventure came to an end with a slightly tepid display in Germany, against an admittedly superb Bayer side, and here are your Ibrox Noise ratings for Rangers’ second leg display.

Made a fine save even through a foul had been called, and was beaten all ends up by Havertz but saved by the bar. Had no chance with the winner. Experienced display. 7

Guilty of some poor positioning and cheap ball losses, but managed more than most to actually go forward and got in a few crosses. Modest night from Tavernier. 6

A solid night from Goldson who made 6 clearances and made one notable block, not to mention 4 interceptions and tackles. He did good work back there. And not only that, he nearly scored. 7

After his woeful cameo in France, this was a bizarre selection. And guess what – he was by a distance Rangers’ best player. A pile of blocks, interceptions, tackles, you name it – his positioning was excellent and it’s such a shame he doesn’t seem to produce this level in the SPL. Top display. 8

Not seen as an attacking threat till later in the game, Barisic was well marked for much of this one and defensively was able to do some modest work. Once he got going a bit he managed a fair number of crosses. His passing was not great though, with a lot of loose possession. 7

Solid night from Davis who had a strong night on the ball with good passing, and managed some defensive work as well. It wasn’t vintage, but he was able to keep things ticking as much as he could. 7

No one had the ball more than Jack, and he was probably the most central figure, but it didn’t mean he did a lot of damage with it. Some of his obligatory defensive stuff but he wasn’t able to influence much. 6

Had flashes of his great skill but faded in and out a lot. Gave the ball away a fair bit and wasn’t able to show how influential he can be. Managed three dribbles but this wasn’t really a night where he shone. 6

He certainly worked hard out there, and he tried things, but few of them came off. Only managed 13 passes the whole match which showed how isolated he really was. 6

Surprise selection, and tried his hardest but just could not get into this one. Showed his pace once, but was snuffed out easy. His selection implied the manager wasn’t overly bothered about this match. 5

Wow. Just completely, totally, and utterly not there. His stats make for ugly reading. 12 passes (only Barker was worse), only 7 of them connected with a team mate, and no shots, no running on the ball, and a tonne of lost balls. No one gave the ball away more than he did. 4

Was determined to give something and he did brighten things up. Got into some good positions, managed to take the ball yards and used the ball well. 7

Literally perfect – 100% passing percentage, some good work, never lost the ball, and gave more in 25 minutes than the other three attackers combined had in 65. 7

Another solid cameo – wants to show he should start, and with a fine display like this, he has a point. This is the kind of competition the manager wants in his squad. 7

His team selection honestly indicated he didn’t care, and so did his tactics. His team was tepid, and the lack of aggression from the gameplan was poor. But it did look like Gerrard was going through the motions and the serious work does start this weekend. But he will be disappointed in just how few of his players actually shone. 6