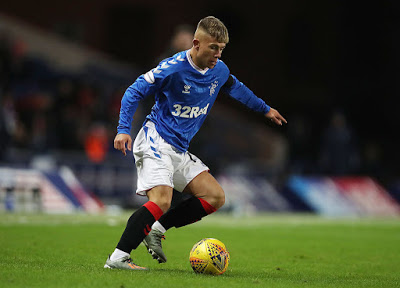 Rangers fans rocked by the shock news that youngster Kai Kennedy has rejected a contract offer and may leave the club have reacted, mostly, in very much the wrong way.

The majority of unhappy fans have slated the lad, slated his advisors, and accused both parties of greed.

Well, unfortunately, that’s not the only problem – it also isn’t a problem at all.

Kai Kenndy is an outstanding youngster with massive potential. A low centre of gravity, pace and confidence has allowed the attacking midfielder to develop in a way reminiscent of a number of more established players, and his qualities would be valuable to retain.

We know Bayern and Man City have been looking at him, and that kind of interest makes a player more lucrative still.

So what are the problems here?

First off – the wage issue. Well, this is where some fans are being naïve. Just like Billy Gilmour, Kennedy has a value – a market rate. If Rangers don’t come up with what he and his advisors believe it is, he’ll go somewhere that will pay that rate.

End of the day, that issue is just cold capitalism, and we all do this – we all value money. It broke our heart to lose Gilmour, but again, partially, money was the issue. And money matters, like it or not. It turns heads, and with the profession only lasting a maximum of 20 years, with just 10 at peak value, players have to exploit all chances to make big money while they can.

However, there’s a more prudent issue here, and it’s significant:

Had Billy Gilmour not left, he’d probably be on loan to Raith Rovers now. In short, Rangers do not give pathways to our kids. We just don’t. Some of them get an outing here, a sub appearance there – but despite all the talent we’ve had in our youth ranks, none of them have truly broken through in years.

Instead our manager signs other clubs’ youth. Indeed, we’re closely linked to Leicester’s Gyamfi, despite having our own Nathan Patterson at the same age for the same position. So, with that in mind, Kenndy and his family might have zero confidence the lad will ever be given prominence in the first team.

Look at Chelsea – when they were forced to use youth, they did, and when they didn’t have to any more, they kept using them. Abrahams, Gilmour, Mount, and at Liverpool Alexander-Arnold – all these guys trusted by their managers and coming through at a young age.

Forrest at Celtic, Tierney, Johnston, Christie – all these young players get their chances at these clubs and they take them.

At Ibrox? Nope, never given the chance, and not a single youth player seen in the first team as a fixture for many, many years, aside the fringe of Ross McCrorie.

That is also fair enough.

Maybe we have to look at our own policies rather than attacking the character of those who choose to take their chances elsewhere.