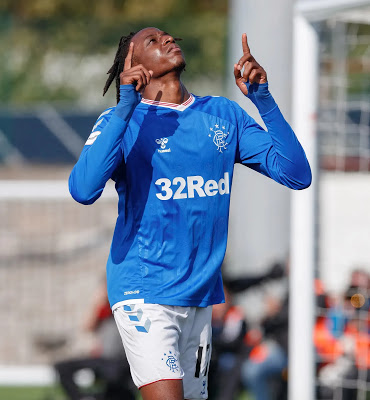 Rangers fans’ reaction last night to Joe Aribo’s performances in France rather sum up the trouble Steven Gerrard has with the midfielder.

Supporters were waxing lyrical about his display, and it was indeed impressive, including an excellent assist for Jermain Defoe’s opener, but it rather highlights the difficulties this club has always had with the giant playmaker.

Joe Aribo’s issues at Ibrox stem from the strange mixture of attributes he has, and the consequent complications of finding the best position for him. In truth, there probably isn’t one, and we’ll get to that in a minute.

The Nigerian international is a talented player, very talented. This site never said otherwise, and we’ve often praised his qualities in that area.

It’s the bizarre amalgamation of other uneven traits that make him such a complicated player, and one who’s hard to shoehorn.

The guy has excellent vision, and a superb pass – he reads the game well, sees others around him, and can open the play up with great use of the ball. The problem here is those are attacking midfielder traits, as he himself declares himself to be – and that particular role requires pace, which is something he doesn’t really have. He’s not slow, but compared with his zippy peers in the 10 position, he definitely isn’t quick.

Then we have the goals. Or lack of. His season stats last season might have suggested he scored quite a few, but unfortunately only three of them were in the league, which is our bread and butter. He got lots of assists domestically, which is ideal in his AM slot, but for someone in his position, his goals return could be a tonne better in the competition that matters – the SPL.

He does, however, have a surprising and unexpected talent for interceptions – Joe Aribo is excellent at ‘turnovers’ or ‘steals’ as the Americans would say. He is very good at plain pinching the ball off opponents, and can even chase them down effectively to rob them of possession.

His own declaration is that he sees himself as a kind of Frank Lampard type figure – attacking mid who supports the box and bursts forward to score. Unfortunately that’s not really the side of his game he’s seemed to excel as.

Aribo appears to be more of a playmaker from deep, a slower-paced visionary who has similar traits, in fact, to Steven Davis, and can dictate the game if given the ball in the right pace. But at the same time, he doesn’t appear to have dominant or leadership qualities to make that position his own.

In many ways we’d compare him to Ovie Ejaria in certain respects – same strength, same excellent composure on the ball and with that curious talent of nicking the ball back, but not terribly quick and lacking perhaps versatility.

We hope Stevie can figure out a way of getting the consistent best out of Aribo, because his good traits are truly exceptional.