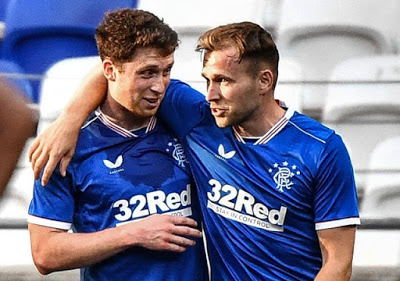 Steven Gerrard, following a busy weekend in France, has been very vocal in the press lately, giving us lots to chew on on sites like Ibrox Noise, and one of the big talking points he raised was over the future of Jamie Barjonas, citing the 21-year old as ‘better than he’s been showing’.

The Auchenhowie graduate has been on the fringes of the senior squad for a long time now, ever since that debut under Pedro all those years ago, and following a pile of loans out, Gerrard has suggested the midfielder is better than he appears, and that he may well remain at Ibrox this season if he continues to show what he really is.

Barjonas is one an Ibrox Noise regular has been banging on about for years, suggesting he was an excellent midfielder who deserved a chance, and Gerrard’s claims seem to back that up – and despite a national red top alleging the anchor will go out on loan again this summer, the manager says otherwise.

Barjonas, like RTC peers Mayo and Patterson, impressed in France, and it would be safe to say all three of them took the opportunities they were given.

The manager’s praise of them all is positive, unlike what he said about another of their colleagues (more on that later), and they may well make bigger impacts on the senior team over the coming season or two.

It’s the first time we’ve seen some strong chances for youth being given a real outing, and here’s hoping it continues.