Home Rangers Stevie G with a big call – who would you pick? 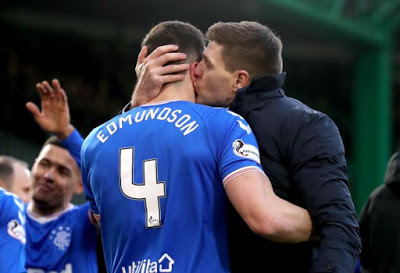 So it’s official. Filip Helander, or more likely Connor Goldson and Niko Katic is definitely not happening in the foreseeable future. The Croat’s diabolical injury has left Rangers a man down, and while we discussed alternatives to replace the 23-year old, in the here and now Steven Gerrard has a big decision to make.

Who is now his number one duo?

There are three options – Helander, Goldson and Edmundson. Let’s have a look at each in turn and appraise their strengths and weaknesses.

The Marmite of the support, aside James Tavernier, the former Brighton man divides the fanbase, and many would be comfortable with him being sold. Truth is this article is arguably a touch moot because he’s a guaranteed starter under Gerrard anyway, but being fair to him, no one clears his lines more than Goldson – no one, in fact, comes close to his efficiency in that department. He’s not physical, no, and he’s not much of a leader. But he is positionally solid and reads the game as well as anyone, well enough to mostly be in the right place to clear the ball from danger. He is, however, poor at being a partner, and only ever looked comfortable alongside a fellow team mate when he was being led by Gareth McAuley.

We’ve not REALLY seen enough of this guy to pass an assured comment, but what we have seen has been mostly unconvincing. Many point to his rotten outing v Killie when he and Katic had zero understanding, but then some of them ignore his stellar performance in Portugal when he was probably our best player on the night. He has had a season to settle in, he’s getting a full pre-season (more on that later) and his underwhelming maiden season might just have been first-season syndrome not to mention of course his horror injury.

This one intrigues us – the baby of our defence, Edmundson has actually probably been more convincing overall in his few displays than his two senior peers, with good tracking, good physical brute defending, an excellent left peg for distribution and an impressive sense of position. At only 22 his maturity on the pitch belies his age, and he’s one we’d love to see more of.

Of course, it’s all moot – we’re not choosing two of three, we’re choosing one of two, because if fit Connor Goldson is the second name on the team sheet behind James Tavernier, so it comes down to Helander v Edmundson.

We’d like to see Helander and Edmundson given a shot in truth, but under this management we don’t expect it.

But if you were managing these three, which two would you pick?

Which two would you pick (select both)?