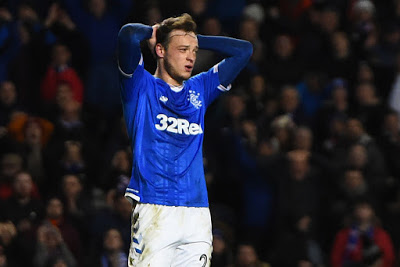 Steven Gerrard has dropped a huge hint about Brandon Barker’s Rangers career so far, and given him a chance to turn it around.

The 22-year old winger sizzled in France on Thursday, showing just why Rangers signed him, but Gerrard’s praise for him was measured and it explained a lot about why it’s gone wrong for the ex-City kid.

“Brandon has come back in an OK place, but I think the other night was the first time we saw the reason why we brought him in. When he plays to his full potential he can be unplayable — and you saw that against Lyon.”

So, in theory, this guy should be starting every match. But the next comment reveals the truth:

“But a few cameos in the time he has been here is not enough and he knows that.”

Now, why would an ‘unplayable’ winger only get a few appearances here and there?

Because information is that Brandon Barker is superb in training, but has been unable to produce it in the match environment, leading Gerrard to only use him sparingly. As such, a few cameos just isn’t enough, and his manager wants to use him more, to see the full player he can be – but he’s held back from doing that because he’s not getting any change in the 90-minute scenario.

A full preseason does seem to have helped, if the Lyon display was anything to go by – the winger looked like a completely different player – confident, electrically quick, composed, all of it.

But he needs to do that more often – otherwise a fringe player is all he’ll remain.