Home Rangers Steven Gerrard has a plan for Calvin Bassey 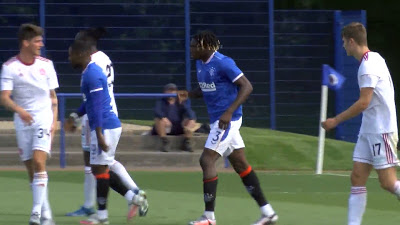 When Rangers fans heard we were moving for Leicester’s Calvin Bassey, rather than excitement the reaction was understandably ‘who?’.

On learning his position of LB and utility CB, most supporters then dismissed him as just backup for Borna Barisic at the left of defence, assuming an inexperienced 20-year old defender without a senior appearance to his name (unless you count the EFL trophy in which Leicester fielded their U23s) wouldn’t be much more than support for our first choice.

But when Ibrox Noise looked at this signing closely, we started seeing that this kid was being earmarked for a bigger role than that, and Steven Gerrard’s comments backed that up, the manager suggesting fans would be surprised how good he was, and that he was going to impress a lot of people.

The manager seemed to be saying this kid was going to be more than just squad fodder.

With Niko Katic’s untimely injury added to the mix, and Borna Barisic’s future more than uncertain, the English Nigerian certainly has a bit of an opportunity to make an impression, and being fair his ample frame and stand-out dreadlocks certainly make him hard to miss, as does his more than notable resemblance to Floyd Mayweather Junior.

As for his qualities?

He’s big, strong, physical, fast, aerially dominant, confident, and reminds us more than a touch of Wolves’ Armand Traore, who not only physically shares a lot with Bassey but plays in the same slot too.

He is of course very young, and his prominence in pre-season is likely as much about minutes and fitness as it is about his being a first-team starter, but we cannot shake that feeling he’ll be a significant player for Steven Gerrard this season.

Our manager has his favourites, and by what he’s said about Bassey, we reckon the fullback is already in that category with the boss.