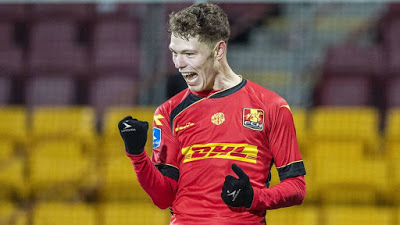 Rangers are set to secure their fourth signing of the summer window with Bologna’s Andreas Skov Olsen coming from almost nowhere to arrive in Govan, according to reports.

The 20-year old, a right winger from Denmark, is an experienced U21 for his country, and while he hasn’t been as prolific in Italy as he was in his native homeland, he’s still strongly-rated and seen as one for the future.

The story of Rangers’ interest broke a few days ago, and if information is correct, the club have acted quick to fill up the bizarrely-vacant RW slot at Ibrox with another promising youngster.

It would also mark the further reducing of the average age at Ibrox, with it being the second 20-year old signed on top of 21-year old Ianis Hagi. Only Jon McLaughlin at 32 raises the age any.

This is still kind of breaking, and we don’t know exactly how accurate it is, but it wouldn’t surprise us at all if it’s true.

Incidentally, with Filip Helander being signed from the same club, and now-departed Peter Lovenkrands being heavily linked with one of Olsen’s ex-clubs in Nordsjaelland, there’s a strong Rangers connection involved in this, so many there is something to this.

We watch and wait.