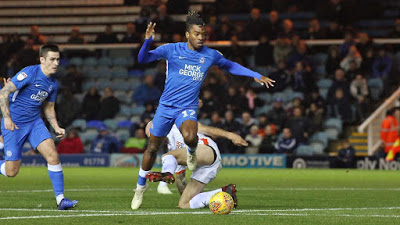 Rangers are allegedly taking one step closer to ‘potentially’ replacing the likely outgoing Alfredo Morelos after claims today of a stepping up of efforts to sign Peterborough’s Ivan Toney.

The 24-year old striker, currently having a strong season in League One with 24 goals and six assists in 32 league appearances for the Posh this term, has been long-linked with a move to Rangers and with Morelos attracting interest from down south and abroad, Toney is one it’s felt could fill the gap.

Rangers have dealt a lot with League One clubs and players recently, with loans into that division for many of our squad players, while also bringing in then-League One Charlton’s Joe Aribo and previously being linked with his former team mate Lyle Taylor.

So as such such a division isn’t that ‘out there’ for Rangers to plunder – and the best-performing players in League One are clearly capable of delivering at Championship level and of course the SPL is certainly not as high as that division in quality.

But we do urge a word of caution – the source for this story is the deeply-unreliable football insider and the claims come from serial clickbait producer Wayne Vessey – his article alleges that he has a ‘recruitment source’ inside Ibrox and that source claims Rangers are going to talk to the player.

We’d take anything this site says with a pinch of salt, because unless they’re bribing club insiders to spill secrets (admittedly not impossible) why on earth would our own staff be sharing insider stories to a source like that which isn’t even a Rangers site.

Anyway, we bring you the stories we have, however truthful or otherwise they appear to be.