Home Rangers Forgotten man at Ibrox probably has no future 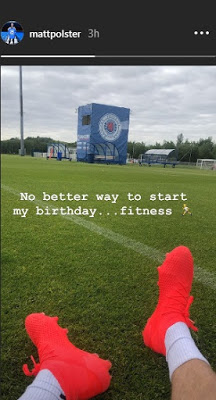 If one man at Ibrox was absolutely forgotten last season, it was America’s Matt Polster. Last month’s birthday boy has suffered complete disuse despite his evident qualities, and since arriving in January 2019, excluding friendlies, has amassed just a ridiculous 10 appearances, including five as a sub.

The USA international utility man has never once complained about his lack of playing time, and has carried himself extremely well, always looking in good spirits at training and being vocal about loving Scotland and the club.

And on his few appearances has impressed, showing a defensive reliability and showing plenty of ability to get forward too.

Indeed, on one of his rare appearances, he linked up beautifully with Joe Aribo deep in the opposition half to show it’s not just James Tavernier who can do overlapping runs.

And James Tavernier, unfortunately for Polster, for right or wrong, is in his way and shows zero signs of shifting.

He is the teacher’s pet of this club, always has been – never dropped, rarely rested, good or bad form, and always defended by his manager.

And that, for better or worse, stands completely in Polster’s way.

We’d never allege the ex-Chicago man is up there with Cafu, but one thing he doesn’t do is cost many goals. He’s not as quick or dynamic as Tavernier, but he’s also thriftier and more efficient – he can be trusted.

But none of this really matters – as long as James Tavernier is at Rangers, Polster remains a squad player.

Truthfully, many fans are probably happy with this – they may not rate Fire’s MVP. And that is fine, because we too concede Tavernier has qualities Polster lacks.

But deep into his second 12 months as a Rangers player, Polster’s career at Ibrox shows no sign of starting at all.

Another one we’re not sure why we signed.