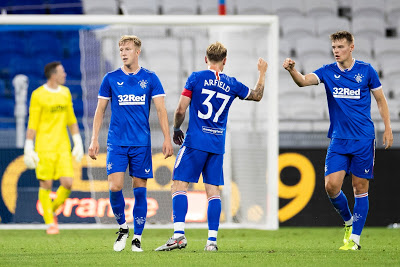 So it’s the afternoon after the night before, with Rangers’ successful return to action seeing a comfortable 2-0 win over French giants Lyon. Ibrox Noise brings you ‘things we learned’ on a very positive evening for Steven Gerrard.

1: Nothing much has really changed in terms of personnel at this club in the past 5 months. Regardless of the fact it did actually play well and do the job last night, the lineup still felt samey and still very much Stevie’s pal club. As long as it continues to perform like that, we can’t complain, but anyone thinking Rangers might have reset and refreshed in terms of formations or personnel with new ideas during the crisis might want to think again.

2: George Edmundson’s latest excellent performance demonstrates he is a serious bet to start this season. Edmundson has never been anything other than impressive, and shows maturity beyond his years seeming to have the smart and intelligence that perhaps the developing Niko Katic currently lacks.

3: Steven Davis’ leadership qualities have rarely been obvious but last night his barking at team mates and leading the line showed that he is still a captain. He might not be known for being loudy and shouty but he is more of a leader than is often acknowledged.

4: Rangers are desperately short of defenders – Filip Helander remains out (again) and of course Katic is long term injured. We have only two seniors available, excluding the utility men Ross McCrorie and Calvin Bassey. A new stopper is a critical must this summer.

5: Ianis Hagi struggles to truly influence the game from the right side, being a 10 as he is, but it doesn’t stop him breaking rank and moving central – indeed it yielded two goals yesterday so despite being restricted out there, he can do damage centrally.

6: Steven Gerrard remains obsessed with trying to find somewhere for Joe Aribo to fit in, and nowhere does. He’s primarily an attacking midfielder, but he lacks pace to burst into the box. He has a good touch and uses the ball well, but lacks a dictating way of affecting the game. He gets assists and can create goals but isn’t great in the air. He’s a bunch of bits and pieces, some good, some not so much, but few of them coherently slot in a settled manner in this team.

7: The formation was a clear 4-3-3 with Davis in front of defence, Jack in front of him, and Aribo at the apex with Kent left Hagi right and Morelos central. Being fair that’s the most consistent formation Stevie’s played as manager, and it’s a chip off the old Rodgers Liverpool block.

8: As we discussed yesterday, Brandon Barker’s excellent cameo may have played him into contention for starting tomorrow v Nice, and Jordan Jones, while lacking composure, showed gumption as well. It was also nice seeing Nathan Patterson continue to develop well. The other subs didn’t really stand out overall.

There are probably more but that will do for now. What did you spot that we didn’t?