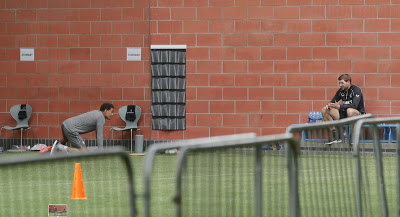 Any Rangers fan hoping there might be a change in captaincy this season better think again after Steven Gerrard’s in-depth discussion with current incumbent James Tavernier during training this week, in a manner he did not share with any other player.

The manager made the original choice on appointment to make the RB permanent leader, and few fans it must be said agreed with this choice.

As time has worn on, Tavernier has become less and less popular as the wearer of the armband, and despite pleas from fans to install the likes of Ryan Jack, Allan McGregor or Scott Arfield as captain, it appears Tavernier remains immune to any kind of accountability and is still leader.

If anything, he seems one of the few players the manager will actually listen to and Gerrard will always defend Tavernier.

The Rangers captain issue has been a thorny one for some time, with Steven Davis a pretty poor one back in the day lacking in any vocal authority, before Lee McCulloch took over and while initially decent, started to also look immune despite faltering displays.

Lee Wallace was a mostly popular captain but came under some fire for not being vocal enough, and his ultimate successor Tavernier gets the same critiques for his utter lack of authority.

But anyone hoping for a change in the guard should have other ideas. Inevitable really.