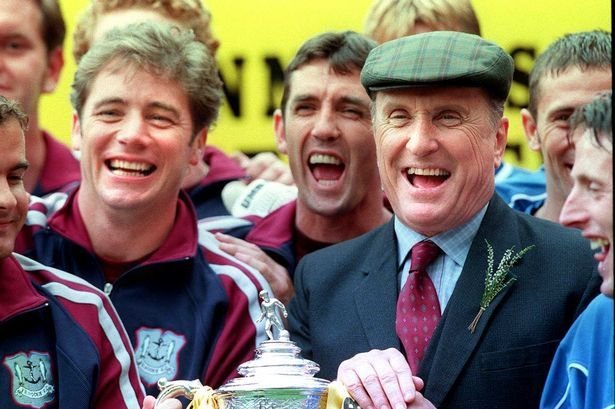 With it being 20 years (September 11 2000 to be exact) since the release of A Shot at Glory ‘starring’ Ally McCoist, we finally, actually, seriously got round to watching this cinematic treat as Ibrox Noise and Mrs Ibrox Noise dedicated a night to discovering this utterly bizarre spectacle.

In fairness it didn’t start too badly, and the archive footage of the Old Firm and what it means to Glasgow was as accurate a representation as we’ve heard from an outsider, so that was a reasonable beginning.

But after Jackie McQuillan and Gordon McLeod showed up, it derailed quickly and we just can’t understand what we just witnessed.

Ally, playing a Celtic legend, and all his Rangers archive footage digitally recoloured green. We cannot fathom whose idea that was, and what on earth the point was. If you needed an ex-Celtic player, why not get one!

More inexplicably we were under the impression Ally’s part was a small role, a wee cameo – but no, he was the main ‘star’!

His acting, for someone who can’t act, wasn’t diabolical, and comically, was miles better than the hilariously awful Bobby Duvall whose Scottish accent was possibly the worst attempt we’ve ever heard. He did indeed sound Russian most of the time and frankly we couldn’t make out about 70% of what he was saying.

So we have no idea what the plot actually was, other than evil Michael Keaton (who was another one who was awful, despite speaking in his own accent) wanting to move Kilnochie (was that their name) to Ireland.

We got the distinct impression writer Denis O’Neill must be a timmy, but then he’s actually Connecticut born and bred…

Everything that could be upside down and back to front with this movie was, and here’s some of the highlights:

Rangers being the absolute baddies, with well-known tim Brian Cox playing manager Martin Smith, who wasn’t in any way based on Walter Smith at all…

Didier Agathe playing for Rangers and getting no mention at all.

Derek McInnes playing for Rangers in the days when he actually liked us.

Andy Gray just being there. Spot of Rob MacLean too…

An ex of McQuinlan literally evaporating into thin air in his hotel room just before his wife showed up.

Rangers beating Lincchocie or whatever their bloody name was.

This was one very, VERY strange film, and it could only have been made by a group of Americans with differing ideas on what their audience wanted.

In the end the thing grossed around $133K in USA, and we have no idea if that was enough to break even.

What can we say, it sure gave us a laugh.