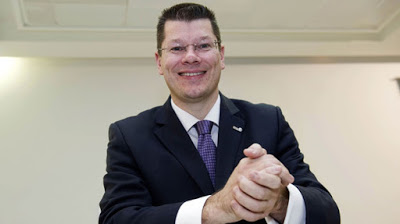 On the subject of Neil Doncaster, how many other eagle-eyed readers of Ibrox Noise noted the news the other day of his wage?

For his ineptitude and bumbling uselessness, the CE of the SPFL has not only been rewarded with a promotion to the Uefa disciplinary committee, but he’s been given an even fatter bonus.

That he’s one of the best-paid football men in his position is beyond an insult, and it’s no wonder he’s rubbing his hands together.

We’re not going to get political and observe many better ways that cash could be spent, but the fact is Neil Doncaster is absolutely no value for money.

Fair enough if we had great sponsorship, a smoothly-running game and a top-class TV deal – but we’re miles off any of these.

Scottish football is horrendously run – no sponsorship, leagues a mess with reconstruction or no reconstruction, and a shambolic vote which led to even worse on the TV deal front.

Yes, we can definitely see why Doncaster has earned half a million quid. £10,000 a week for frankly the square root of not a lot.

Scottish football has next to no money in it – struggling to bring in a sponsor and currently having so little revenue it’s painful.

And yet what little we do have seems to pay for Neil Doncaster’s opulent lifestyle.

Really good use of funds, guys.