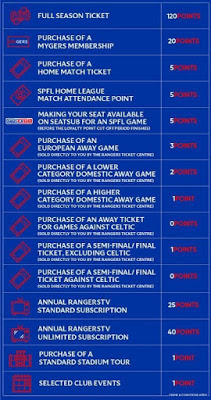 Rangers have announced a ‘loyalty’ scheme for supporters and it’s safe to say it’s caused a few arguments here and there.

The main gripes seem to be centring around the fact an RTV subscription earns more than a European away game, and, indeed other loyalty awards based on supporter purchases, which are causing subjective disagreement about what should be worth what.

We’ve heard a number of arguments for and against Rangers’ policy and points values, and we’ll lay it out here.

A lot of fans, for example, are unhappy about a massive trip to Jinkikan Republic in the outer reaches in Syberian Mongolia being worth less than a digital subscription to the online broadcasting services the club offers. They point out the fans on these journeys give massive support and the team would struggle without them. Look how we did in Braga with our loyal band of blue behind us as Ryan Kent nabbed the winning goal.

However, it must be remembered Rangers don’t make anything from these matches – not from fans anyway. It’s the opponent and travel partners who do.

And there’s the issue with that side of it – this loyalty program mainly rewards fans who have directly put cash into the club. No surprise ST’s are by far the most lucrative reward, as are annual RTV subscriptions.

Whether fans think loyalty for a trip to Parkhead or a trip to Outer Mongolia should be rewarded handsomely or not is not for us to judge, but we’re factually addressing the issue that this scheme, for right or wrong, mainly rewards direct funds going into the club.

We’ve even heard one reader argue her father should be rewarded for 94 years of support to the club and indeed his country in WWII. We don’t strictly disagree with that at all, but this loyalty program isn’t about morality, it’s about who’s put the funds in.

And it’s safe to say fans are a tad divided on it.