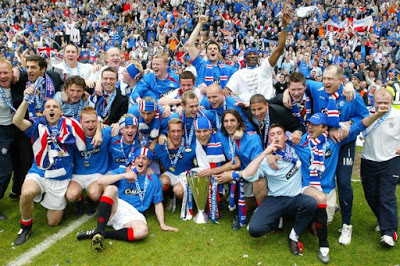 Celtic probably feel like they’ve ‘won’ in Scotland, with their 8.5 in a row and the fact most of our game is in their back pocket.

But Rangers have, and always will have, two killers over Celtic that Parkhead will never recover from, will never get over.

Maurice Johnston in 1989, and, 15 years ago to the day, Helicopter Sunday.

A lot is being made of the latter today, and rightly – Celtic still cry over the worst and most heartbreaking title loss in Scottish football history, or the greatest one depending on whose side you’re on.

But let’s not also forget the Mojo ‘scandal’ of 89, when the striker was 100% returning to Celtic from Nantes only for Graeme Souness to pull off the most sensational signing in Scottish history.

These two coups are, were, and always will be, the biggest GIRUYs in Scottish league football, and they just can’t be beaten.

Celtic did win the European Cup, but Rangers made the effective semifinals during the tougher Champions League era. And during the inaugural one. We also won the CWC with a far harder route than Celtic’s EC was.

But if you ask Celtic fans what hurts the most, Mojo and HS are the killers. They hurt them far more than their EC win hurts us – because these were things done to Celtic by Rangers in pure football senses, and they’ll never get over them.