Home Rangers How to win 9IAR, and how NOT to…. 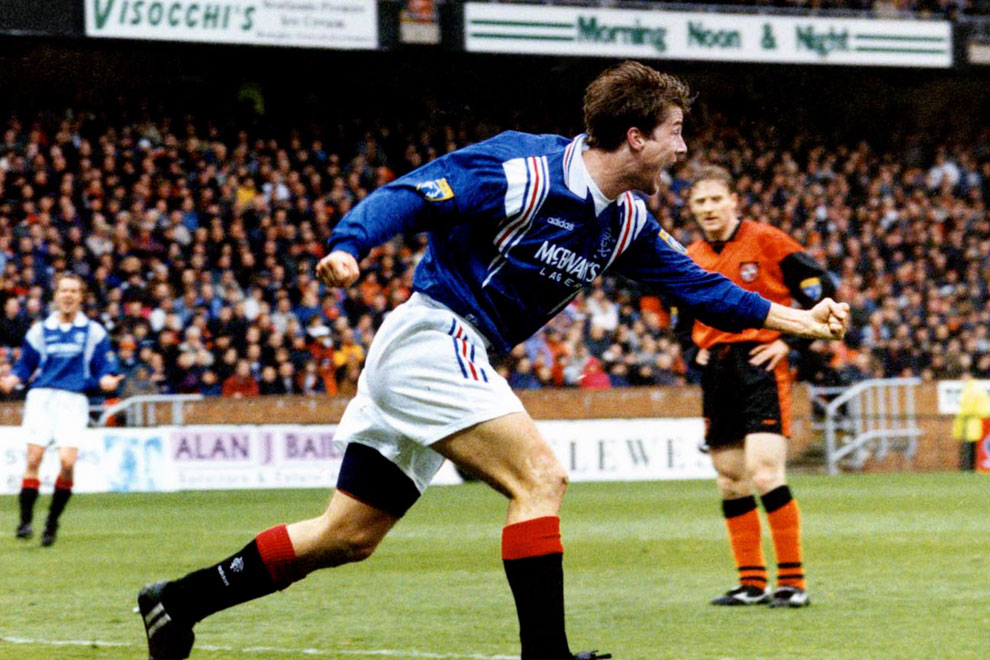 7th May 1997, a day forever etched into the memory of Rangers fans and most football fans in general from all over the world. After a hard-fought season and another record where Rangers had won all 4 Old Firm games that season, the first clean sweep we had over Celtic in the Premier League, we did it!  But I don’t believe leagues are won and lost only in Old Firm games. That would be disrespectful to all of the other teams who give their best and can and have taken points from both sides of the Old Firm during a season. That’s why we love the game, the sheer excitement and unknown each week and the losses and failures make the wins oh so much sweeter!

But on the 7th of May 1997, we did it. We won not only the League, but the coveted 9 In A Row Championship!  Charlie Miller drops the shoulder and allows the ball to bounce in front of him before using his left foot to play an almost inch perfect ball into the box. It seemed like the ball was floating in the air too long and no-one was there, but then Brian Laudrup, arguably one of, if not the greatest, ever players to wear the famous jersey sailed in to score a powerful diving header and seal not only his, but Rangers’ place in the history books once again.

It was almost unreal that Laudrup who could score with both feet and often some sublime and seemingly impossible goals would score an absolute belter with his head, something he was not known for!  The fans went wild, as you would expect and the party started and continued long into the night and the next day!

The points tally was done, it was mathematically impossible for anyone to catch us and that is the way it has always been, you win when all games are played and who wins the most points, wins the league.

The usual digestion, pub arguments and banter ensued about what woulda coulda, shoulda have been, if only we’d won that tackle, scored that goal, got that penalty things could have been different!  This is what happens after the end of a season and awards are handed out.  Everyone reminisces about each game and how it came to be.

This will not happen this year.

Now, I don’t want this to sound like sour grapes, admittedly our form had dipped dramatically after the Christmas break and there were 13 points between first and second place, albeit with a game in hand, but it was still mathematically possible and this is why this title will be argued about for decades to come.

My issue is, was and always will be, if Rangers had managed to keep their momentum going after winning the last Old Firm game at Christmas and kept the points gap to only 5 points with a game in hand, the SPFL could NOT have finished the league like this and handed out the trophy! It just wouldn’t have been allowed! Fans, Directors, Chairmen and players from most clubs would have argued, there may have been other votes, meetings or games being played behind closed doors, but no league championships or relegation would have been decided until all games had been played.

And this is my issue; if the points tally had been closer, 5 with a game in hand, it would not have been ended the way it has been, everyone would have put their heads together and found another way and this is why this is so hard to take.  The same should apply here and not be downplayed because of the points gap.  Where does it end, if it had been 5, 6, 7 8 points, would any decisions have been made?  Even most Celtic fans, when the celebrations have ended and the sore heads have cleared, will realise that this title will always be doubted, argued about and debated and I’m sure they would rather have won it, fair and square.  Unfortunately this is not the case. Sure they’ll celebrate, but deep down they’ll always know it wasn’t won, but defaulted!

There is nothing more that can be done.  Now we as a club need to focus on assembling the correct squad for next year and stop any talk of 10 in a row.  Steven Gerrard has a momentous task to decide who should stay and who should go and who has the mentality expected from Rangers players to give everything and keep it up, through the whole season, so that when the title is decided it is on points, merit and the heart of the players and fans who deserve it, just like Brian Laudrup and the rest of the 1997 9 In A Row Squad.