Home Rangers “The next Cafu” – probably not – where is former Rangers defender... 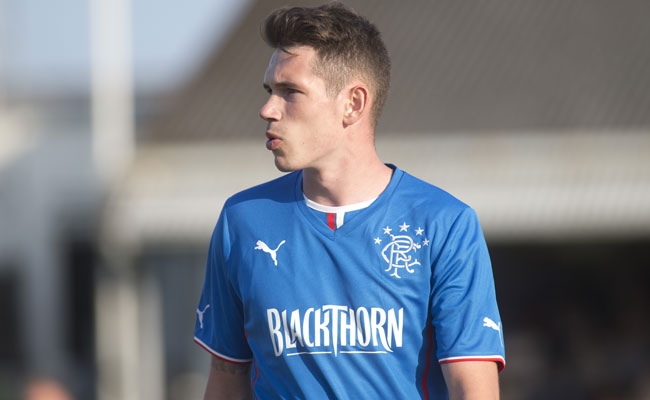 In today’s ‘where are they now’ series entry, we look at a RB we actually believed in for a short while, a pretty handy young player who looked like he might actually make something of himself during the ‘trialist’ period, but who faded badly without trace and was barely used after that.

Kyle McAusland only managed seven appearances for Ally’s Rangers, with ‘competition’ from Ricky Foster and Seb Faure, but the young defender did himself justice, debuting in July 2013 in the cup during a 4-0 win v Rovers at Liv’s Tony Macaroni.

It was hoped by the fans he’d get a bit of a run, but McCoist wasn’t having it and put Faure in instead soon after.

What happened to Kyle?

It was loan city for the now-27 year old, with Ayr and Brechin the main two beneficiaries, before Dunfermline, Alloa and today, Glenafton all took him for nothing.

Yes, he’s out of semi-professional football and is now playing junior level, with its modest levels of remuneration.

He’s got 67 appearances in League One, which is alright, and 32 for Alloa in the Championship which is solid enough, but sadly his career just didn’t happen and he ended up in the West of Scotland Super League Premier Division. Four years he’s been over there, and we hope he’s making some useful money, but we wonder if Ally was indeed right about not giving him a shout.

We still ‘fondly’ (kind of) remember his bright performance at Livi, that cup match v Rovers during aforementioned trialist era – ah, those fun days of assuming any bright young thing from Auchenhowie was the next Cafu or Messi.

Those were the days, right?