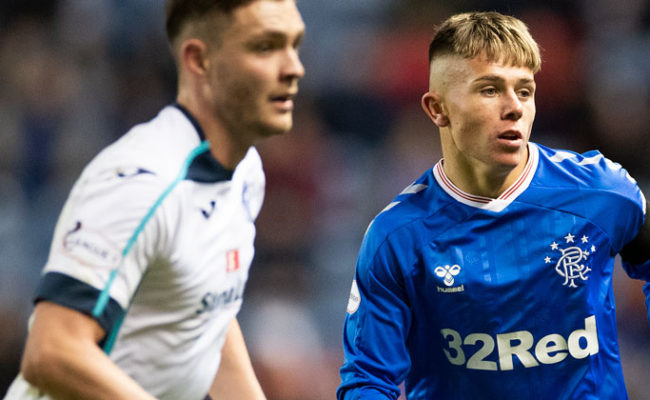 Rangers’ youth systems have been a mixed batch, with so few graduates making it through convincingly to the first team yet.

True, our managers are generally loathe to give the kids a chance, worrying either about their own reputations by giving a lad a game, or by ruining the lad himself.

But it was a pleasant break from the norm to see a few youth used this season, notably Nathan Patterson, and, significantly, Kai Kennedy.

The latter is very much a rising star at Ibrox, with keen admirers from Man City and Bayern Munich reported to be keeping tabs on his progress, and the 18-year old attacking midfielder impressed on his Rangers debut against Stranraer, making it a inspiring double for the youth academy, Patterson already having started the same match.

For Kennedy’s part, one stray pass aside, he didn’t look overawed – the truth is these kids can’t be rabbits in headlights – they have to be raised to handle the pressure, and only the precious few who can do so will ever have a chance of wearing that heavy jersey with pride.

Patterson did it with aplomb in that match, and Kennedy did himself justice with a 10+ minute cameo too, and this pleases us.

As for the playmaker’s actual performance? He looked assured, quick, punchy and confident – and should have scored but for Brandon Barker’s diabolical attempt at an assist late on.

So while he’s green around the ears yet, and might not be fully ready at present, like Patterson it’s inspiring to know these players are there, and getting more and more prepared for the real time.

It’s the right way forward and hopefully we see more and more of it.