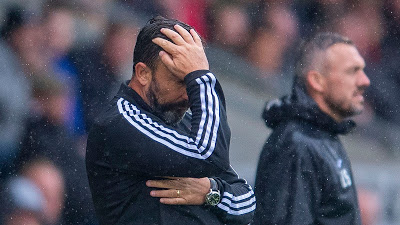 Derek McInnes has engaged in a classic case of whataboutery after apparently changing his mind over who should/will win the title.

Half a week ago McInnes was in favour of the ‘common sense’ approach of giving it to Celtic if the remaining matches could not be played, but has now backtracked a little and said Rangers should in fact be given that chance to win the title as a priority.

A former Rangers player of course, McInnes’ reputation with Ibrox fans is not the best after his altercations with former manager Pedro Caixinha in particular, and some of his comments have sounded a lot like sympathies towards Parkhead, but this latest about turn suggests he doesn’t really know which way to go so switches his angles a lot.

Sure, you could argue he’s somewhere in the middle, but Rangers fans generally wouldn’t see him as even that despite his former employment in Govan, but who knows.

What we will say is this time he’s correct – the league should not be passed to Celtic by default, it should be played out in the future when possible.

Null and void is also the easiest for Rangers fans to say too, but the reality is that’s no better than Celtic being handed it.

End of the day, McInnes might get it wrong a lot, but his latest comments appear to be complete common sense.