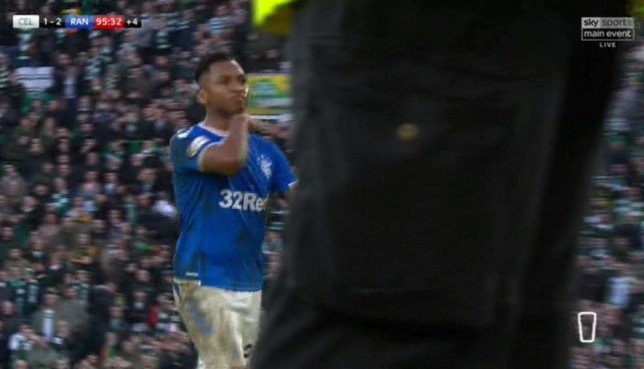 In the second of our ‘let’s rip the players to shreds’ series, we concentrate now on the taboo topic of the weekend – Alfredo Morelos.

No point beating about the bush, we’re going to cover this shambles.

First off, as we’ve repeated ad-nauseum, Alfredo Morelos hasn’t been seen since that day at Motherwell in December.

He’s been, absolutely, unmitigated garbage since that match, playing as poorly as any Rangers flop of the past like Jeffers, Ostenstad et al. Whether it’s the off-field stuff or not, frankly no longer matters. Morelos has given the clear impression of a player who no longer wants to be at Ibrox, and probably one banking on a move out in January.

And so we come to the latest circus around him.

Alfredo Morelos’ mother took ill, so he asked for compassionate leave to head home on Sunday, but was told he had to return on Wednesday. Rangers had a big match on Saturday, and Wednesday Thursday prep was critical for the game.

Alfredo Morelos arrived back 24 hours late – and, now we admittedly conjecture a little; by Steven Gerrard’s demeanour, language and testimony, Morelos had not done the professional thing by calling and asking for an extension, he’d just arrived late. Nothing more, no explanation, nothing.

Disciplinary action was the only valid response if that’s accurate, and while we’ve called out many of Stevie’s errors, this wasn’t one.

If Morelos needed extra family time, simply courteously asking for it and requesting he potentially miss the cup match would have been deemed acceptable, we’d hope. He’s played so badly he’d hardly be missed anyway.

But from the manager’s claims, there’s an inferring that that wasn’t forthcoming.

Now, we don’t know the full truth, maybe he did ask for extra, and it wasn’t granted. If that’s the case the club hasn’t been entirely honest. But with Morelos’ track record we suspect he went a bit rogue and just got back late without prior warning.

But either way, whatever the truth, and we must attest we, like you, don’t know it all by any means, there is now officially bad blood between Morelos and Rangers and Steven Gerrard.

By disciplining him and axing him from the squad, it’s a statement of anger, retribution, and exasperation.

Players have come back from this kind of situation before to recover their reputation with fans, but that we found only one single Rangers supporter who backed Morelos over this rather than the club and Gerrard out of the hundreds and thousands on our site and social media, suggest he will have a mountain to climb to get the fanbase on his side again.

They’d already lost a tonne of faith in him such has been his dreadful displays and increasingly stinking attitude, and this is a really big nail potentially now in the coffin of Morelos’ Rangers career.

Time will tell what happens now, but here’s a final thought:

Rangers’ best domestic form since Stevie took over was in April May of 2019, the split. Morelos didn’t play much at all during that thanks to a four-game suspension.

There’s life without him. Just like there was in Portugal.

Is Alfredo Morelos now finished for you at Ibrox?
Online Survey Creator