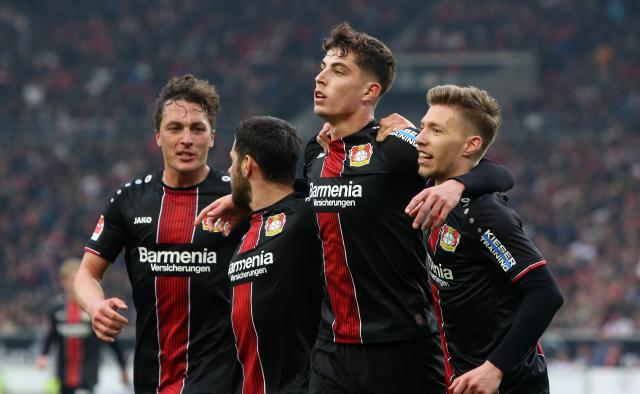 With this weekend showing that too many in the team had downed tools for two months, and they only started playing after they had already thrown the league away, it’s really hard to know what to expect this Thursday.

Will we have 11 players all playing their socks off, or will we have a relapse to the five or six coasters who want the others to do all the hard work?

I have to admit I am now banging my head off the computer screen. I know that I should be talking about the upcoming game against Bayer Leverkusen, but what made them suddenly decide they had to show everyone they had to play as if their life depended on it on Sunday (when Celtic have already won the league), but they gave only 50% effort when it really mattered, in January and February? Didn’t they want to be champions? Don’t they want to be in the Champions League?

It’s not known what team will turn up on Thursday. That makes it so difficult to identify a good tactical shape.

Overall Bayer Leverkusen are weakest when they play against a team that presses them. They do leak goals, even against teams with only a moderate attack force. Otherwise, they will do the high press, and they are very comfortable passing out from tight spaces. They are like a Braga, but they have far better tactical awareness.

Overall, Bayer seem to prefer the 3-4-3 formation, and they usually dominate possession, with attacks based on a diamond formation at the back. Their defenders like to draw the opposition defenders forward, and to then use the long ball over the top of advanced defenders to take advantage of the speed of their attackers to run on to goal. Kai Havertz plays across the park, and is their version of Ianis Hagi. Havertz is considered to be so dangerous that the opponents in the Bundesliga are already doubling and trebling up on him.

That means the best tactic to use against Bayer is a fluid 4-4-2 that can transition to 3-3-4; 4-3-3, or a 5-4-1, when the game requires it. This is the best tactical game plan, and that brings us to the game on Sunday, when Alfredo Morelos was substituted, late in the game.

Gerrard knows how Bayer Leverkusen is set up, and he knows where their weaknesses are. So, don’t be surprised if Morelos is used tactically in this game – a ‘secret’ weapon if you like. This is a game where we will finally see where Rangers are in the world of football. No kidding, this is the toughest game yet. Just their attack force alone, Kevin Volland, Leon Bailey Moussa Diaby are valued at around £70 million, but if this Rangers team really wants it and we are set up properly to deal with their formation, Bayer Leverkusen have many reasons to be wary.