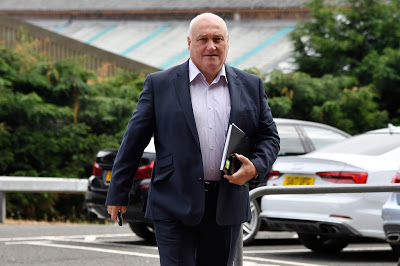 If the word on the wires to be believed, Rangers’ long-term director of communications James Traynor has been replaced.

We aren’t actually too sure how we feel about this, in truth. This article isn’t intending to condone or condemn the man, given we don’t know him, and know a thing or two about being judged by people who know nothing of us.

We must admit though, this appears to be directly off the back of the bungled Morelos interview, and the Tavernier notes fiasco.

Traynor’s job, effectively, as part of the spin company employed by Rangers, Level 5, was to control propaganda in and out of the club.

Don’t feign shock, all significant clubs do this and have this – any large commercial group needs a department to paint their operations positively, and when a negative story surfaces it’s their job to either get rid of it or twist it into positivity.

This is just modern industry at its best.

But Traynor did appear to make two big botches this year, albeit in truth while they happened under his watch, he wasn’t strictly personally responsible.

First off the Morelos interview was down out-house – it wasn’t by Sky and it was translated by a third party who Rangers clearly didn’t vet well enough. Traynor doesn’t speak Spanish so how on earth could he know what was correct and what wasn’t.

Secondly the Tavernier pre-match notes were the bigger disaster in truth – Gerrard said someone should have raised the alarm, but who had the authority to do that? To actually say to Tav, no, you shouldn’t say that? The only one who really had the patriarchal authority to make that change was Traynor, and that was a mistake that he didn’t. But was he supposed to read the whole thing? Well, as DoC, we guess that was his job.

And then of course there’s the assault – we don’t know the full facts but the claim is neds threw a stone or rock at him when he was out and about, and there remains an appeal to this day for them to be found.

Either way, he’s now out of employment, and some Rangers fans are rejoicing while the media decides to take offence over his replacement.

We’re not taking either route. Traynor was a man employed to do a job for Rangers – no more leeching off the club than anyone else paid by us – and he made a few mistakes, like any human does.

We wish his successor good luck, and we have no axe to grind with the now former DoC.