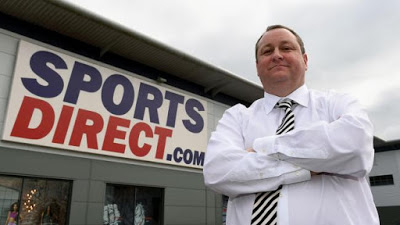 When Mike Ashley confirmed last night that Sports Direct would defy the government legislation on staying open as a non-essential service, it rather highlighted the character of the man.

Sports Direct is Ashley’s baby, it’s his project, created in 1982, and these days called the Frasers Group in a bid to shed the toxic Sports Direct name.

But when they were announced as remaining open, it summed up the kind of person he has become – that once again they will put profit before lives, sales before security.

Rangers are stuck with Sports Direct for the foreseeable future, and as many Ibrox Noise regulars have stated, it’s one big promise Dave King utterly broke when he swore we’d get rid of him.

In truth, while Rangers have progressed the past few years under King, he has not been able to shift the tycoon out of the picture, and Rangers remain at his mercy – this basically means someone, somewhere, will have to figure out how to win in court and get the man and his company out of the Ibrox radar.

But last night’s decision to stay open (it has now been reversed following an outcry) just epitomises the loss of moral congress evident in the upper echelons of Sports Direct.

We’ve heard the historic stories of the Zero Hours nightmare, that pregnant women were claimed to have given birth in the toilet of the store because they were forbidden to leave or face losing their job.

While these sound beyond rustic and Draconian, we know just how ruthless and cruel Ashley is said to be.

The funny thing is, away from business, his reputation is exactly the opposite – he’s actually claimed to be a truly decent, loyal, kind and helpful man.

But in business? Suddenly he changes and behaves in manners unacceptable in modern life.

They call it ruthless, we say it’s cruel.

And being willing, for a short while, to keep his shop open and to hell with health really does make our point for us.