Home Rangers James Tavernier has been getting away with it 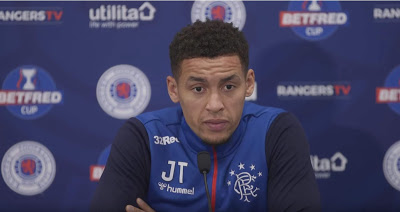 At some point today we’ll find something positive to scribe about after yet another horror display on the domestic front, but if we were you we wouldn’t hold our breath.

Reponses on the site and our social media have been scathing – only a handful of replies with the obligatory ‘get behind the team’ piffle, and a whole load of quite the opposite.

We are all Rangers supporters, and that doesn’t change, but a new low was hit yesterday, a Rangers team who simply didn’t care.

With 20 minutes to go, only Sheyi Ojo (inexplicably) appeared to be trying for his manager and the supporters, while Hearts looked far more like going further ahead than Rangers did to equalise.

This group of players, mostly, didn’t give a damn.

And in yet another round of ‘toast the underperforming rot in our shirts’, James Tavernier has now completely run out of platitudes from even those who usually ardently back him.

He was beyond mince yesterday, as he has been for around four months now.

His backers say ‘look how much we missed him’, conveniently forgetting the losses this calendar year and dreadful performances WITH him in the side, but yesterday did appear the end of the line for the majority of those who think James Tavernier is a good enough RB for this club.

We barely even need to mention how comically rotten he was at the goal, so we won’t, he’s cost us plenty of goals over the years, so what difference does another one and a diddy wee trophy gone make?

We hark back to Matt Polster, who might not be quite Cafu, but showed enough in his few appearances to prove he’s the better alternative. And before you argue about Tavernier’s attacking qualities, they’ve vanished. He has two assists (in all competitions) since early December, and that case for his defence is now gone, as is his crossing, which has been pretty abhorrent.

In short, Polster is a better player. He’s proven that. He’s not as quick, but he’s smarter, and knows how to read the game.

We’re not even going to go to the Tavernier being captain stuff, it’s just a joke to even consider that he wears the armband.

Just know that Tavernier being leader and undroppable is part of the pickle Rangers are now in.

And that one, for sure, is on his manager.