Home Rangers There is no reason Rangers can’t beat Braga…. 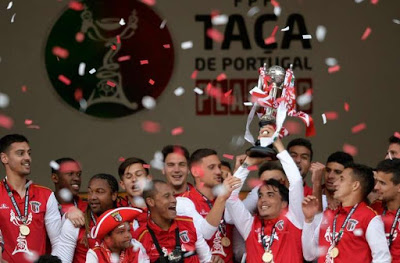 Now that the team has successfully put the league to bed, though who would have imagined Rangers could have blown it so badly that the league is effectively over by the middle of February, the team can try to show they truly do care, by doing well in the Europa League.

On Thursday it is going to be a very tough match, because Braga play a very similar style to Rangers.

Until last weekend, when they switched to a 3-5-2, they usually adopted a 4-3-3, with a high press, and over-lapping left and right backs. However, their backline does not advance as often as Tavernier and Barasic (who will probably not be playing this match).

In many of the games that Braga have played recently, either the opposition or Braga have had one player sent off. So, it is very difficult to determine how well they play for the entire 90 minutes, in a 11 vs 11 scenario.

Overall, their attack looks quite potent, and they are comfortable at shooting from range, playing rapid passing through the lines and they will go the high route to goal when necessary.

At the back, their goalkeeper is not of the highest level, but he is competent. Their defenders also appear to be a little bit suspect when they are playing under pressure.

Looking at the game from the viewpoint of the Braga manager:

Overall Rangers’ primary strength is the team plays as a unit. All players are involved in defending the goal, and all the players are tasked with scoring goals. If they turn up, they are skillful at passing out of tight spaces, and the players are fast.

Currently, Rangers’ primary weaknesses are the absence of Borna Barisic, and the decision-making of Joe Aribo.

Aribo, if he is chosen to play, is clearly a very skillful player, but he refuses to take part in any aerial duals, he is often timid when tasked with tackling opponents, and he tends to go AWOL when the play gets physical. This can be a problem for Rangers, when he is supposed to be one of the primary players at the center of attack.

So, Braga are perhaps slightly weaker at the back, and Rangers are slightly weaker going forward. However, there is nothing really special about Braga’s team; and If we play with desire, Rangers can win this game.