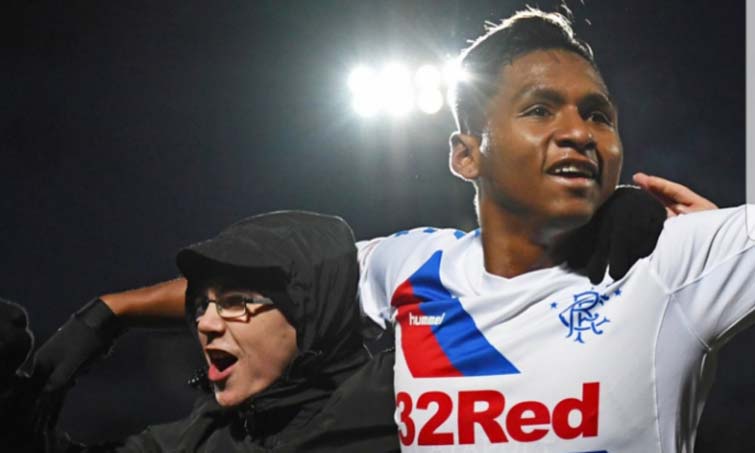 Now, before we start this piece, it’s not meant in any way a smear on Alfredo Morelos, who is clearly one of Europe’s most prized strikers, and we love him hugely.

So bear that in mind before you think we’re having a go – because we’re not.

But that is now the fifth transfer window Morelos has been involved in at Ibrox that, once again, has seen nothing but constant speculation and no hard bids.

The only bids for the Colombian we ever heard of were a £3M bid from Fenerbahce about a year ago, and an alleged £11M one from a Chinese side.

In short, another transfer window passes without a single genuinely credible bid aimed at the striker, despite the Scottish media’s best attempts at selling him for us.

Every upcoming window we hear how every club under the sun wants him, and is going to pay big money, yet nothing ever materialises.

You know why? Alfredo Morelos is completely unsellable and the ones making the stories up are the press.

Yes, he has been watched, of course he has, but the only club who actually made contact in January were Newcastle, and they were quickly priced out.

What are we saying?

We’re probably not going to lose Morelos at all, is what we’re saying.

He’s been here two and a half years and must have been linked by the red tops to almost every notable club in Europe at one point or another – yet every window comes and goes and he stays.

Now, before any green and whites come in (believe us, they swarm our sites) saying no one wants him, just how many bids came in for Edouard? How many came in for Dembele before Lyon went for it? Doesn’t mean these players aren’t wanted, all three are exceptional talents.

But it’s evident Scottish media is obsessed with big money stories to sell papers, to get hits – the bigger the numbers, the sexier the club interested, the more the paper profits.

But it’s become apparent now that Morelos, contracted for years, is extremely unlikely to go anywhere any time soon.

It won’t stop the rags printing garbage about him, that will never stop, but it’s definitely clear now that with a young wife expecting and his being settled here (car incident and appalling general treatment aside) Morelos won’t leave.

Not unless a completely ridiculous bid comes in this summer.

And it just won’t.