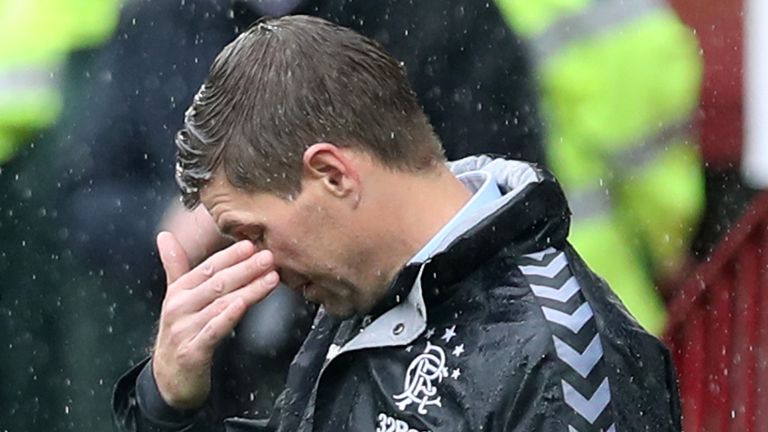 Wednesday night’s sobering defeat at Killie has led to the first real sentiment from a number of fans that our manager might not be the right man.

Regulars will know we call it honestly, frankly, with optimism where merited and with pessimism where deserved.

And Steven Gerrard’s post-match comment were the most serene and blunt we’ve yet heard.

He accused his side of proving him wrong in thinking they had the mentality of winning the league, and equally took massive responsibility on himself for what’s happened recently.

Is he the right man?

Last season, we could excuse this post-winter slump – Stevie was a rookie boss and that was his first season in charge. We also had a fixture call off which ‘ruined momentum’.

They define insanity as repeating the same actions time and time again hoping for a different outcome.

By that logic Steven Gerrard’s management is, by pure definition, insane.

He has repeated the same errors, not learning from the big ones which derailed last season, and copied them all over again, word for word.

And that’s the key attribute here – supporters now see Gerrard commit the same mistakes and are calling him on it.

Is it time for him to go?

Well, we can’t forget Europe – the staggering runs in Europe which have restored the club’s credibility on that stage. He’s presided over a superb Rangers, one which has done us incredibly proud.

But, unfortunately for Steven Gerrard, Rangers are measured on domestic trophies.

He’s passed the Europe test, and he’s done very well with the Celtic one, but the end product, silverware, looks as far away now as it’s done since 2012.

It would be wrong to say this manager has been a total failure, because things have certainly been better under him than they were under Pedro or Warby.

But, and we guess this is the blunt end result – on the stage that matters, the SPL, they’ve not been good enough. Not after the turn of the year, either season.

Gerrard might just be a nearly man, and he can’t even attack the budget because we’ve been beating the richer team – but up against your Killies, your Aberdeens and Hearts to name but 3, we’ve dropped horrible points and these lot are on a fraction of our budget.

It may well be time to consider a new path, because we’re not sure Gerrard is capable of going on a new one at Ibrox in his own right.