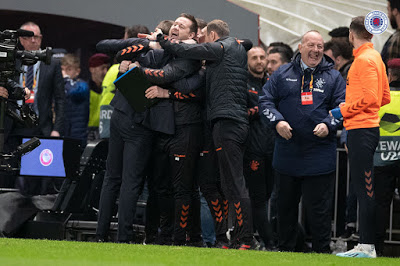 Oh god how all the experts gave us no chance, but as we at Ibrox noise have said for two weeks now, Braga’s game plan played right to Rangers’ strengths.

As we said, Braga were just taking too many risks, and Rangers have now won three and drawn once against two of the top three teams in Portugal. To put this into context, at the start of this season Portugal were 7th in the European Coefficient, and Scotland was a ridiculous 20th. In fact, Scotland were so low in the national rankings that the heads of Europe announced they did not want us in their premier competitions.

Well, on this form Rangers would be contenders for winning the Portuguese Primeira Liga, and I think there is finally a realisation, at least amongst some, that Scotland’s rapid rise up the tables is not a statistical fluke.

But, will the other teams now take us seriously after this?

Actually, I don’t think they will. Many players in our team were the rejects from other teams. Those who were not good enough to play at the top level, or to even get into the first team.

They will look at the first game and see we were all over the place, and the second game where we played a tactical boring game and think we are still one of the weaker teams in the group.

So, I am happy they will continue to not take us seriously. This is a team that wants to prove their doubters wrong, and they will give it everything.

Though recent results have given Celtic their 9IAR it is clear that finally the team realised their critics were right to call out their lax playing style (which Gerrard condemned in January) and their effort has increased dramatically in the last few matches.

It’s now too late to win the league. That’s gone. However, there is still a lot to play for, and this could still be a very interesting year.