Home Rangers A staggering night of belief at Ibrox 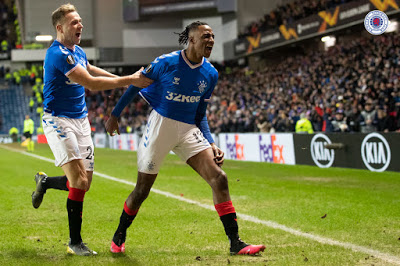 There’s no denying Rangers’ form this calendar year has been basically ghastly – we all know this and wouldn’t hide from it.

And until Ianis Hagi’s stunning opening strike last night, that pattern pretty much continued – barely a pass met its target, and our opponents simply destroyed us.

Unfortunately for Sporting Braga, they were both profligate in front of goal, and had an inspired Allan McGregor in their way – and those two gave Rangers a sensational path not only back into the game, but to the most unlikely win we think we can remember in many, many years.

Make no mistake – Braga were leagues better than us. It reminded us very much of 1992’s ‘gubbing’ at the hands of Marseille where Deschamps, Voller and co taught us a football lesson, but could only actually score twice, before the most magnificent McSwegan header sparked an astonishing comeback to secure a point.

This one was one better. Down and out, well and truly beaten, then Ianis Hagi failed to read the script with a subline tight finish, before Joe Aribo made it even better with an astonishing dribble, only for the Romanian to finish the lot off with the winner.

How we won this match no one will ever know, because we both didn’t deserve an inch of it, and utterly deserved it completely.

We were beaten in every area of the park, our big players, Arfield and Hagi aside, just weren’t there, with Morelos, Barisic and Davis all struggling. Only McGregor showed what he was made of at the back, otherwise Rangers were outdone everywhere.

On that basis we deserved less than nothing.

Yet Hagi’s crowd baying after he scored showed he hadn’t given up; the Ibrox crowd responded, and from there, 1-2 down, there was an inkling of belief.

The players then fought, scrapped, dug deep, and somehow Joe Aribo produced his own Maradona moment to put it away and then we believed.

At this point, we deserved. We’d earned the right, through sheer graft and will – and we saw the spirit of Stevie out there with them, playing with them, never giving up with them, and fighting on.

And then we got the winner.

The crowd truly was the 12th man here, Stevie was practically the 13th, and this could, could just be the result to show this group of players they CAN be what we need them to.

To win this impossible victory was quite staggering, and Braga will be shaking their heads till the end of time at it.

Will this kick start the season again?

We can see what this group of players can do when they believe, when they put their mind to it.

It just depends on how much they want it.