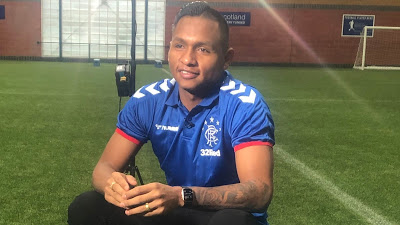 We’ve talked long enough about Alfredo Morelos’ form, and we’ve been surprised to see a lack of support for the striker from the responses.

We’ve tried to be neutral, explaining a lot of the causes behind his slump, but the factual matter is Morelos never came back from Dubai, and arguably the last time he was really seen in public was Motherwell.

So we ran a poll to gauge fans’ opinions on the matter, to see how many supporters want to see him remain in the side, to stick by him, and how many have lost patience.

Surprisingly, an astonishing 75% of Rangers fans polled have already had enough, and would sell Alfredo Morelos, even if he gets his form back between now and summer.

Just 25% want to persist with the striker.

The feeling we sense is the love affair fans have with the player has rather run its course – as one of Ibrox Noise’s staff put it after the match, fans barely to never sing the Morelos song any more. Even Ryan Kent’s tearing defences apart, time and time again, whether he actually is or not.

But the Morelos tune? It’s just pretty much vanished.

This is not to say Rangers fans now dislike him – but the lad’s clear apathy on the pitch, atrocious work ethic and lack of goals or enthusiasm is coming across in abundance.

Ever since Motherwell (the gesture), Celtic (the dive and silly gesture) and Braga (dissent) we suspect supporters have run out of patience with the negative side of his game, because there’s no longer a positive one.

Fans were forgiving the circus around him as long as he was playing well. Well, he no longer is.

Will this all change if Stevie persists with him and suddenly he’s rifling them in left right centre? Possibly – us Rangers fans are a fickle lot.

But we also won’t be taken for fools, and like so many others in the XI at present, our striker simply isn’t trying.