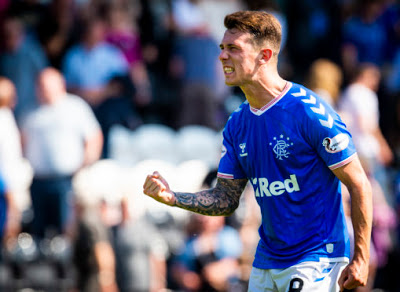 Ryan Jack is a genuine rising Rangers legend. We love him, and what he does for the club. Few put in as much drive as he and he’s many fans’ pick as a captain in the future.

But in a recent Sky Sports interview, the dynamic midfielder said something which is factually correct, but morally miles off.

“We don’t want to come off our standards where we have been – we have done well but we have not done anything yet.”

We have to say we thoroughly disagree. While factually it’s true we’ve won nothing, to say we’ve not done anything yet is modesty of the most admirable degree.

When we look at what this club has done under Steven Gerrard in the last 20 months, to suggest it is nothing is certainly a little unfair.

One historic run through ALL the qualifiers in the UEL followed by another.

A qualification for the last 32 of the UEL against some titanic teams.

3 wins over Celtic, including breaking a 10-year bogey run.

A cup final in which only bad refereeing decisions cost us the trophy.

And making Celtic panic this January into signing players.

Oh, and being effectively top of the league at present while also having done it joint with Celtic some months ago.

We respect Jack, he’s just being modest – and the manager is right to keep the squad’s feet on the ground by drilling the ‘nothing’ thing into them.

But to come from where we’ve been to end up where we are and looking at where it appears we’re going – that’s not nothing, not to us.