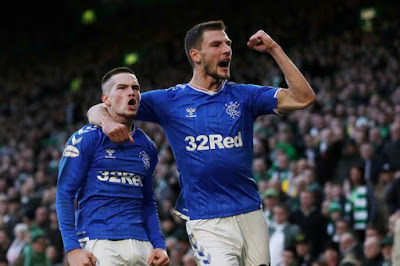 Ibrox Noise was recently discussing with a good friend of the site, who happens to support Chelsea, that we hope Frank Lampard doesn’t hear about Borna Barisic any time soon.

True, Lampard doesn’t really play with strict full backs like a back four would contain, using Emerson and Azpilicueta higher up the pitch in front of his back three, but it got us thinking just how good Barisic actually is, and we realised something fundamental:

Borna Barisic could play for almost any side out there, certainly in England.

We could make argument all day and night for his raw ability, and assists, and quality of defending, but what isn’t subjective and is completely objective and neutral is his dozen Croatia caps and firmly-established starter status for this outstanding international side (ranked 6 in the world) as one of their best and most reliable performers.

We preached non-stop last year that while his Rangers career hadn’t got going, he was a £20M player because of his regular Croatia caps and ability to perform at the highest level for them. That that global platform justified such a value. We got derided by all but one of our readers for this.

Well now he’s doing it for Rangers, arguably even better than for his NT, and there’s absolutely zero doubt he’s good enough to play for pretty much any club side around.

Of course you might disagree – you may think our judgement is hysterical – but with a slight fan divide over how good Morelos is, and whether he could play for a top 6 side in England, for example, we have zero qualms at all that Barisic could.

If Aaron Wan-Bissaka, a pretty modest FB, can play for Man Utd, we have no doubt Barisic could.

The classic UK example of course is Trent Alexander-Arnold. The 21-year old, already an England regular and with 20 PL appearances for Liverpool this season under his belt and the small matter of a Champions League medal, is evidently an exceptional talent. He is worth around £100M and could certainly play for anyone, although he doesn’t need to given he’s currently at the best club side around.

But Barisic is in that kind of class – he’s older, of course, and never worth £100M because of that, but at 27 still has a tonne of quality in him left, and the evident ability to shine for the best sides.

We hope we hold onto him, for a very long time indeed, but equally, we know just how good he is, and it’s our contention few sides in the world would be too big for him.