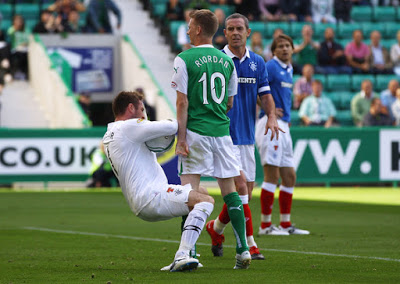 The latest Tyrese Campbell developments got us thinking about all the historic Celtic attempts at nicking our players, or transfer ‘sagas’ involving both clubs.

We touched on this one earlier, Rangers really wanted this guy for a long time, but did sit on their laurels a bit regarding bids. A modest bid of about £500,000 we seem to recall making, but Hibs wanted more like double that. Rangers refused to go higher, and Celtic came in, pinching him for a fraction more. Then his career completely nosedived.

Rangers were extremely close to this one, but he failed the medical – we don’t really know why, but off he went instead to Parkhead, passed theirs and ended up being one of the most effective strikers in their modern history. Definitely a booboo by our medical team, oops!

He said no to the… yeah, them. Rangers sought this guy for months as a foil for Dado Prso, a perfect little and large combo. He was outstanding at Dundee and Raith and in the distant days before Ibrox Noise, your humble editor preached and begged Rangers to move for him, before interest did actually begin. But Celtic jumped in ahead with a deal offer, prompting him to at least do the courtesy of going to Parkhead to discuss terms. And decided he wanted Rangers for sure. Rangers got him for about £500K and he, while limited, turned into a truly great wee signing who gave it all.

The most recent example and the biggest farce of the lot, with even Celtic manager Ronny Deila later admitting the truth. So as we know Allan is a bluenose, one of us, and Rangers and Mark Warburton wanted him from Hibs. But they wouldn’t sell – not to us. Petrie and Stubbs just refused, and came out with poppycock reasons. They were being nothing more than bitter, and petty, and Celtic decided to completely destroy it by nabbing him instead. Allan had no real choice – he’d made it clear he wanted out, but if Hibs refused to sell to us he was likely to end up frozen out. So made the reluctant decision to join Celtic. A mistake he’d regret. As for Deila, he admitted later Celtic purely made that signing to annoy Rangers, nothing more. And that’s the mentality of those in the east.

Some of these examples show Scottish football really is all about the Rangers. Celtic sure are.