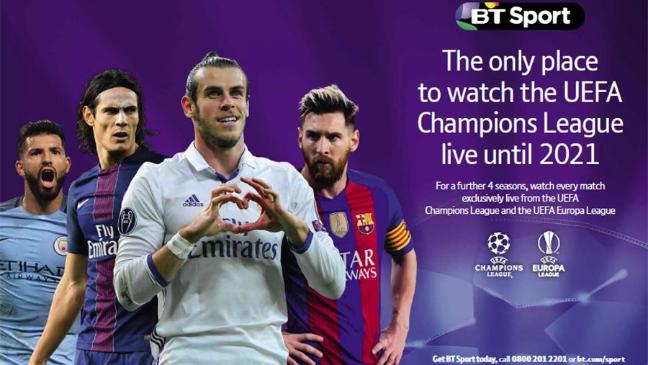 This one is a slightly more off-beat story than usual, less of a story indeed and more of a curious observation.

As our readers may recall, we once covered how our players’ values are rather incomprehensible because the world of transfer fees skyrocketed to crazy levels pretty much in the absence of us from the top flight.

Since our return, even many of our own fans reject our players being worth silly money, pretty much because we’re not used to this new world of SPL players being cashed in for £20M+.

And there’s something else that also happened during our dark days in the lower divisions, something we don’t think we’ve seen referred to on a single occasion:

BT won exclusive rights to both the Champions League and the Europa League.

Gone are the days Rangers’ Uefa cup runs were covered by ITV, or by Eurosport – since our return to the European stage, it’s been BT (aside RTV and Premier for the qualifiers) who have all the coverage, and this is where our prominent observation comes in:

Rangers were last in the Champions League when Sky Sports had it, pre-2013.

BT Sports, with their £1B acquisition of exclusivity over that and the Europa League in 2013 means we’ve never seen ourselves on BT sports coverage as a Champions League team.

It’s trivial, yes, it’s even minor, perhaps – but it gives some idea of how much the world has changed and how long since that we are yet to hear Darren Fletcher or Ian Darke commentate on us as a Champions League hopeful on BT’s exclusive coverage.

It’s not that huge, in the grand scheme of things, we know this – but the last time Rangers were in the Champions League Jeff Stelling was introducing the English clubs and Bill Leslie was commentating on the Scottish ones with the likes of David Tanner presenting and Ray Wilkins (RIP) or Trevor Francis and Steven as pundits.

And we look greatly forward to being on BT Sports UCL coverage at long, long last.