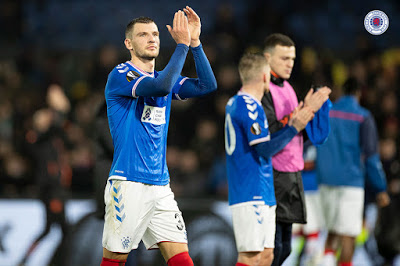 Following a propaganda Roma site yesterday making up mischief about star LB Borna Barisic, who the Giallorossi want for a bargain knock off price, it has emerged that Rangers have put a ‘not for sale’ sign on the Croat international, and will not be selling the former Osijek man at any price.

Fellow Italian giants Napoli have reportedly joined the hunt for his signature, but the ‘word on the street’ is the defender and assist king is ‘unsellable’ at any price except something ludicrous, and he will not be going anywhere.

Barisic has a tonne of unfinished business at Rangers, and he’s a pivotal part now of the club’s pursuit of 55, and the same tactic as used on Newcastle to say unequivocal ‘no’ to their overtures for Alfredo Morelos has been used to spread the word the 27-year old is staying put.

There had been comical talk of a loan deal for Rangers’ most prized asset, but unsurprisingly that absurd offer is a ‘no’ too.

Rangers want to get the Croat pinned down to a longer deal, increasing his salary and making him feel important and well-looked after, and we can’t help but feel his exploits in the UEL and his stunning performance in last month’s Old Firm triumph have only helped him feel even more settled and happy to keep on plying his trade in Glasgow.

So, thank Roma, and Napoli, but no thanks.