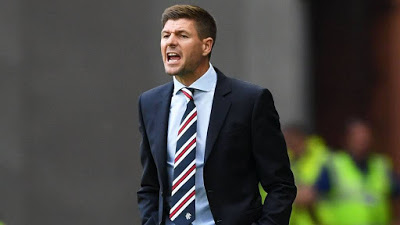 Rangers have been linked with a move for a mystery opponent who faced us in the Europa League this season.

Word is talks are ongoing, but if Gerrard is indeed making ground on securing an opponent from this season’s competition, it would be the third such time the manager has done so, with one stunning success in the form of Borna Barisic and one dismal failure ‘technically’ in the form of Eros Grezda, albeit the Albanian did not feature for Osijek having been injured since that May year.

Details are scarce on who it is, but some are claiming it’s a ‘goal scoring’ player who’s right footed – which implies a midfielder or an attacking midfielder.

This would narrow it down to Feyenoord’s Steven Berghuis and Luis Sinisterra, YB’s Christian Fassnacht and Porto’s Otavio.

Or it could be a qualifying opponent.

Either way, Rangers almost certainly are working on new recruits – the current squad is overall not good enough to last a full season, even if the main 18 for the first team are – any injuries could change things dramatically.

And we shall see who this ‘mystery man’ is in time should the story be confirmed.