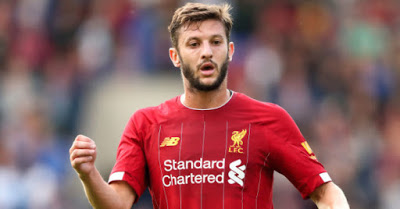 Steven Gerrard could use his Liverpool contacts and make a blistering signing come the summer, if he was interested in securing the services of playmaker Adam Lallana.

The 31-year old is out of contract in June, and free to talk to other clubs this month, but first team football is his priority meaning top half PL sides are probably not going to be interested, and Lallana is a player used to European football.

Gerrard, of course, is rated exceptionally highly globally, but nowhere more so than in England and at Liverpool, where while Jurgen Klopp is the here and now, many fans feel reassured that eventually Stevie will go home to manage his first true love when the time is right.

His job at Ibrox has certainly raised his managerial stock considerably, with the miracles he’s worked in Govan being global news of late, and eventually when Klopp moves on Gerrard is surely first in line for the throne.

And that’s why the Anfield side, with its links to Gerrard, might be keen on Lallana moving to Ibrox, albeit Klopp confirms he ideally wants the international to stay.

Lallana has been a fringe player for two seasons now, as Liverpool’s juggernaut formed more and more invincibly, and it’s taken extraordinary players to be fixtures in the first team, which Lallana might not quite be any more, but he’d still be an absolutely staggering signing for Rangers to make.

And if Lallana himself wants a club almost as big as Liverpool (let’s face it, Liverpool are probably the world’s biggest club at the moment) which is still in Europe then he could do infinitely worse than Rangers.

It obviously would see a huge stumbling block in wages, with a reported £110,000 a week, but at his age he’s going to struggle to receive that anywhere now, although whether Rangers could afford what more modest sum he’d require is another question.

Either way, we got Jermain Defoe, and he’s a megastar – why should Lallana be beyond our reach ither?