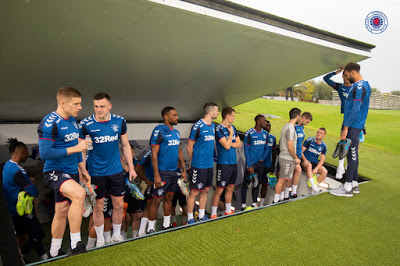 Rangers have returned to the UK following a productive session in the Middle East, but most of the talking point about the camp in Dubai was over the friendly v Lokomotiv Tashkent.

Specifically the fact that despite making the flight, Jake Hastie, Ross McCrorie and Jamie Murphy played no part in the 90-minute exhibition match.

Now, we could give some very generous dispensation to McCrorie and Hastie, by suggesting their loan clubs didn’t want any risk of losing them to injury in (slightly) competitive football before they returned back to Portsmouth and Rotherham respectively, but we clearly cannot give that ‘excuse’ to Jamie Murphy.

Even Greg Docherty, probably the least-fancied of all the major senior Rangers squad these days, managed to get himself a runout (to mixed reviews, in truth), but despite some youth also getting minutes in their legs, Murphy was left out completely.

There are two possible reasons for this:

1: He is once again injured. This is a long shot. He took complete part in all the sessions so he was definitely fit. The only counter there is he may have picked up a small niggle close to the match that we don’t know about.

As we discussed earlier, players who aren’t in Gerrard’s thinking didn’t travel – Grezda (now departed of course), Middleton, and Jamie Barjonas to name but three were not on the flight.

But Murphy did go – he just didn’t play.

Maybe there’s a third reason – it’s just how things ‘worked out’. But this is clutching at straws.

Murphy deserves first team football – probably not good enough for Rangers, but he has plenty left in the tank, and we really hope he gets his future resolved soon.