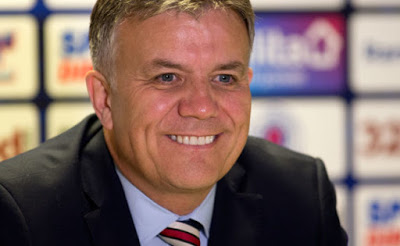 Rumours abound about why Mark Allen left, from it just being the end of his project to his wanting to go back to England.

But a more plausible one is starting to look the culprit more and more as January’s window deepens by day.

As now two unwanted pieces of dead wood are clinically removed from Rangers’ payroll in the form of Eros Grezda and Andy King, without an ounce of official announcement to even say cheerio, we can’t help feeling Ross Wilson is doing what Mark Allen couldn’t:

Getting the wage bill down quickly and getting shot of all the surplus early.

Last summer there was a flurry of exits right at the end of the window, including loans, with Dodoo and Dorrans expensive mutual consents, but a real lack of clinical work done at the start, bar contract expiries, and instead most of Rangers’ unwanted had been loaned out during the summer window.

But we’re barely at the end of the first week of this four-week window and already Grezda and King are out, while Eduardo Herrera is said to be following soon.

Jamie Murphy, Greg Docherty (sad face) and Matt Polster are reported to be on the agenda too, with Glenn Middleton’s future up in the air as well.

It is said that there were internal disagreements about players and the wage bill between Allen and the board, and the feeling persists that the ex-City man’s performance for bringing in quality and making profit, while trimming the wage bill, frankly, was beyond appalling.

He got us Steven Gerrard, and it is looking like we’ll be forever grateful for that, but if the picture we’re getting is fully accurate, Allen presided over a lot of wasted funds and may have wasted Rangers many millions.

End of the day, Ross Wilson, inside barely a week, has already cut loose two men, while working on many more.

And we’ll see if any quality comes in as well.