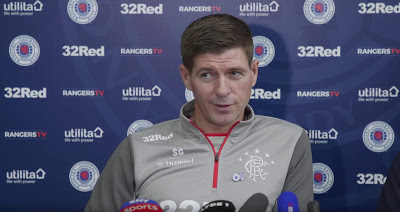 Rangers fans gave up on the manager ever giving the 23-year old a chance, but no explanation had ever really been made as to why Docherty was so far from the first team, but Gerrard has now admitted he’s not a player he fancies.

Not in explicit words, but in as indirect and polite a manner as he can.

“This is a player we respect very much because of the way he’s gone about it. He’s given his maximum effort to try and push the lads in the starting XI, but unfortunately it hasn’t happened.”

The ‘unfortunately it hasn’t happened’ part reveals that Stevie is admitting no matter what the midfielder does, he’s not good enough for him.

End of the day, it’s a blow for those who ever thought Docherty had a future at Rangers, but it’s not unexpected given how he has been frozen out by Stevie.

Furthermore, we kowtow to the manager who’s earned a lot of trust and slack after last month’s heroics, so while we’re disappointed a personal favourite player is not in Gerrard’s plans, we accept it.