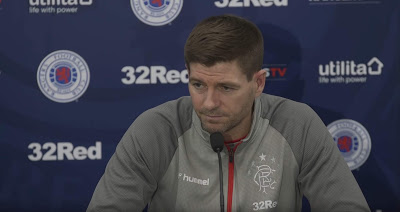 King, a Wales international, has barely featured since his loan north from the King Power Stadium, and as time has gone on, Ibrox Noise and others have questioned whether the PL winner was a signing Gerrard sanctioned, and we concluded he probably wasn’t.

Now Gerrard has more or less admitted the same thing:

“I haven’t been able to give him the game time he would have liked but I made it pretty clear to Andy when he came it would be tough and a challenge for him to get any opportunity so it was one we were both keen to explore to see how it would work out.”

Pretty much any signing Gerrard makes gets game time – it’s that simple. Any player who finds themselves frozen out or not in favour either wasn’t sanctioned by the manager in the first place, or is a rare disaster like the bizarre farce that was Umar Sadiq.

But Gerrard, in his own words, warned King he more or less wouldn’t play, and Stevie just wouldn’t say that to a player he willingly sought to bring in.

The King saga was an odd one – an unnecessary addition in the first place, the Welshman has barely even featured on the bench, despite Stevie’s polite insistence Kamara, Jack and Davis’ form is why he didn’t play more.

He will go back to Leicester this month and we hope he finds a better solution than a club who doesn’t need him.