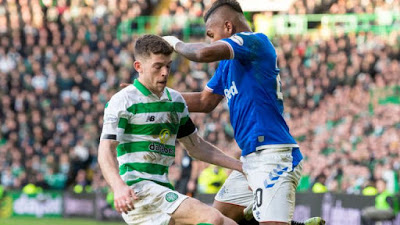 Rangers fans have often felt the SFA and Scottish authorities were against them the past decade especially. F*ck the SFA rings out at Ibrox frequently following the latest bizarre decision taken on the pitch by a man in black, and the frequency of citations against our players and not Celtic had been noted significantly.

Which is why Ryan Christie’s two-match ban really is an indication, along with the result at Parkhead, that the Scottish tide continues to turn in Rangers’ favour.

Let’s face it, we’ve seen way worse offences on the pitch in our game, far worse than one guy having a bizarre pluck at another one’s manhood.

It was silly, crude, and unnecessary but we’d have been beyond outraged had it been one of our players cited for that.

Not only cited, but convicted by Clare Whyte, officially.

Whyte has a reputation, whether deserved or not, of being a closet Celtic fan, a season ticket holder, and biased against everything Rangers.

Over the past few seasons, as MD Stewart Robertson put it, there was a distinct climate against Rangers and we couldn’t understand the lack of an even playing field.

And with Rangers becoming Scotland’s best team again, it feels like our influence is starting to be felt again.

This ban, while hardly for handbags, seems very strong, and we’d have defended vigorously any boy in blue who was charged with it.

And that’s why it happening to Celtic suggests the start of a seismic shift in Scottish football where a much more even playing field is starting to materialise.

We don’t want masons in the black, honestly we don’t – we want a fair playing field for all teams north of the border, with no bias towards or against anyone, and everyone treated honestly.

Unlike Celtic fans, who’ve revelled in ‘owning’ Scottish football, we don’t want or need that – we don’t need the help of refs or authorities to be the best – we’ve done that on our own, thanks.

But we do want fairness.

And this ban is an example of how that might just be coming back. At long long last.