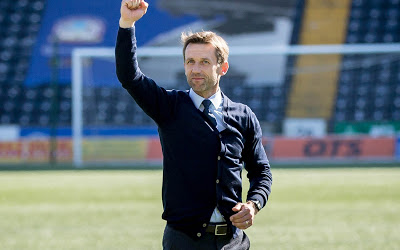 With the press going radio rental over the speculation surrounding Glen Kamara, we must look at this player in more depth.

Neil McCann, his former manager at Dundee, stated this was a player capable of going to the very top of the game:

“I wouldn’t be surprised if an English Premier League team took him either. Put it this way, his next move is not going to be his last move. Wherever he goes now he’s going to make that club an awful lot of money. I’ve been there so I know what it takes to play at a club like Rangers. If it was to be Rangers or any of the other clubs that have been mentioned, Glen could play there easily.”

With the Fin on the verge of a move be it January or this summer, it looks like McCann was bang on – even if his Barry Ferguson comparisons weren’t quite so accurate.

Nevertheless, Kamara’s rise from an unwanted Arsenal kid loaned out to Colchester to being reportedly courted by Serie A kings Juventus plus his former employers and many others shows a surprising regard for the player that Rangers fans don’t universally rate.

The majority response to all this speculation is he’s very sellable, and far from indispensable – although many fans think he would be very useful/vital for 55 – ‘and then sell him’.

He’s a player we don’t see universal affection for, with a general respect evident if not an overwhelming admiration.

For instance, Kamara isn’t loved anything like the same as Borna Barisic, Niko Katic, Ryan Kent or Alfredo Morelos, to name just four, and he doesn’t appear to have achieved a major attachment with supporters.

Personally we gave him great credit for admitting faults in his game, conceding his form earlier this season wasn’t the best and attributing that to why he was in and out of the side.

But there’s a feeling, generally, that on top of his frequent losses of concentration and overly laid back approach on occasion in matches, that Kamara is slightly playing within himself at Ibrox – something he does not do for his country.

It almost feels, perhaps, that he’s saving himself for the big PL move that he admits he wants.

And that’s why a number of fans talk about Kamara’s ‘potential’ despite the fact he’s well into his 25th year.

We do think the Fin is destined for the very top – maybe at Arsenal (albeit they’re hardly ‘the top’ these days) or possibly that big move to Juve – Neil McCann was adamant his time at Rangers wouldn’t be his last move, and we’d have to agree.

But as long as whatever happens is to Rangers’ benefit, we’re not overly fussed, in truth.

The club is what matters, along with 55.