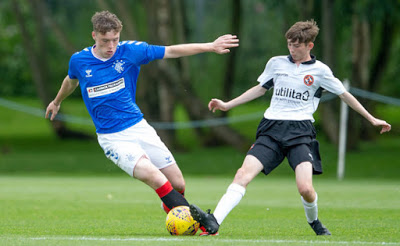 We alluded to this earlier – young starlet Leon King rejected a deal last year and now Man City are hovering around the 15-year old defender, who certainly has the world at his feet.

Rangers have already made a contingency plan in securing Motherwell’s Kyle Semple, but it is obviously disappointing to potentially lose one of the stars of the Hummel Training Centre.

Should Rangers pay more to hold onto him?

This is a 15-year old, a child, and it would be absurd to pay through the nose to keep such a player, but then when we look at the talent of Billy Gilmour and his growing prominence for Frank Lampard’s Chelsea we were unable to hold onto that one and have no desire to repeat it.

Of course, tit for tat – Rangers nicked Nathan Young-Coombes from Stamford Bridge in much the same way, and have ended up with an exceptional young talent who will probably be a Rangers star of the future.

So all is fair in love and football, but we do hope we make the right call over King, whatever it is.

If he is worth the extra pounds, then despite his age, maybe it’s worth paying the arm and leg for him.